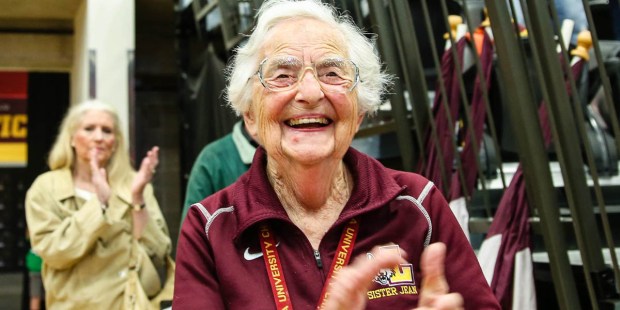 Her Ramblers are this year’s March Madness Cinderella story

You would have had to have been living under a rock not to have heard of Sister Jean, Loyola University Chicago’s chaplain. Since her Ramblers started stringing together upsets as this year’s Cinderella story at the NCAA basketball tournament, Sister Jean Dolores-Schmidt has been everybody’s favorite fan.

Last night her team won its third straight game and will advance to the Elite Eight, the first time the program has done so since it won the national championship in 1963. Along the way, Sister Jean has provided spiritual as well as strategic assistance. She leads the team in prayer before each game, and puts together scouting reports on Loyola Chicago’s opponents before each game.

Watch this team prayer before last night’s victory of Nevada. In this case, the presence of camera’s and microphones kept her from giving her full scouting report to the team, but she promises to pass that information later:

"Stay focused. Use your heads and your hearts."

“We’re focused. We know that we have to play hard against every single team member. And I have to say this, there are too many microphones here today for me to give you the numbers of the guys, but I have a way of getting those to you. So just be alert, stay focused, use your heads and your hearts, and let’s make that next game our Elite Eight. God bless us. Go Ramblers. And amen.”

Loyola-Chicago went on to beat Nevada, 69-68, and will play Kansas State on Saturday night in a contest for a place in the Final Four.