The faith of Lieutenant-Colonel Beltrame, the French police officer who took place of hostage 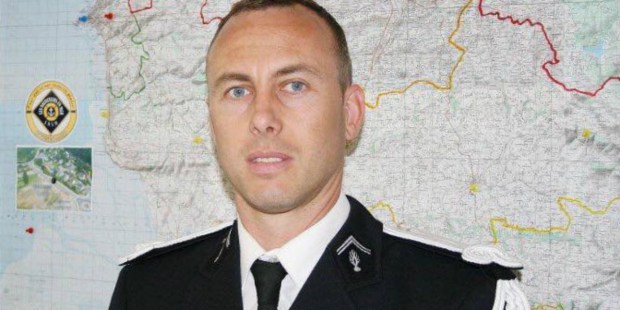 The announcement of the death of Arnaud Beltrame, the lieutenant-colonel of the gendarmerie who, the day before, had voluntarily replaced the hostages held by a jihadist in a supermarket of the Aude, moved the whole world. This ultimate sacrifice testifies to the deep faith that animated him.

“There is no greater love than to give one’s life for one’s brothers.” It is with these words that the Diocese of the Armed Forces hailed the ultimate sacrifice of Gendarmerie Lieutenant-Colonel Arnaud Beltrame, who died this morning of his injuries after replacing a hostage on Friday during the terrorist attack on the Super U supermarket in Trèbes, in the French department of Aude.

[Twitter post:] “‘There is no greater love than to give one’s life for one’s brothers’ – our thoughts and our prayers go out to the wife of Lieutenant Colonel Arnaud Beltrame, and to the great family of the Gendarmerie.

“My colonel, your heroic act is emblematic of the values of our commitment to the service of the Nation, among which honor is first and foremost,” said General Lecointre, Chief of Staff of the Armed Forces. By this ultimate sacrifice, Lieutenant-Colonel Arnaud Beltrame testified to his deep commitment to serving his homeland… and his neighbor.

[Twitter post] My colonel, your heroic act is emblematic of the values of our commitment to the service of the Nation, among which honor is first and foremost. I would like to pay tribute to you, and assure your family and the entire @Gendarmerie of our full support – General Lecointre

“It turns out that the lieutenant-colonel was a practicing Catholic. The fact is that he did not hide his faith, and that he radiated it, he bore witness to it. We can say that his act of self-offering is consistent with what he believed. He served his country to the very end, and bore witness to his faith to the very end,” said Father Dominique Arz, national chaplain of the gendarmerie, in an interview with Famille Chrétienne, a French Catholic magazine.

“To believe is not only to adhere to a doctrine. It is first to love God and your neighbor, and to testify of your faith concretely in everyday life, in the happy or unhappy circumstances, and even in the dramatic circumstances of our lives,” he explains.

Legally married but without children, Arnaud Beltrame, who had recently made the pilgrimage to Compostela, was to marry sacramentally in June in a church of the medieval city of Carcassonne. Instead, it has been reported, he and his wife were married in a Catholic ceremony as he lay dying in the hospital. He arrived last year in the prefecture of Aude as a deputy officer of the department’s gendarmerie.

[Twitter post:] Attacks in Carcassonne and Trèbes: The City pays tribute to Constable Arnaud Beltrame, native of #Etampes. The city has just lowered its flags.