If God is a God of surprises, what is my response, pope asks in Easter homily 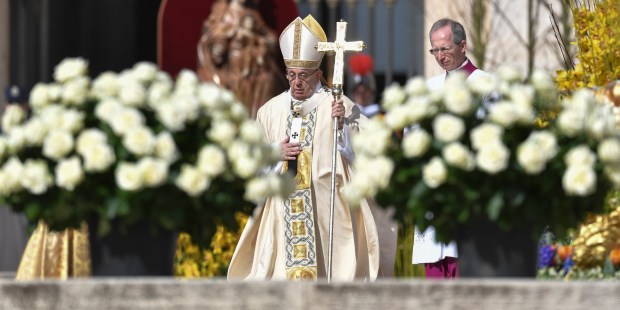 Speaking off the cuff at Mass in St. Peter’s, Francis says God’s surprises are worth running toward

Pope Francis today celebrated Mass in St. Peter’s for the Lord’s Resurrection, speaking off the cuff during his homily, which he focused on three points.

He referred to God with a description that he often uses, saying that God is a God of surprises.

The women had gone to anoint the Lord’s body and instead found themselves standing before a surprise, he remarked. When God announces something it is always a surprise because God is a God of surprises, Pope Francis said.

He reflected that God has been this way since the beginning of the story of salvation — with Abraham: one surprise after another. God does not know how to make an announcement without surprising us. Surprise moves our hearts and touches us where we do not expect, the Holy Father noted.

Pope Francis then turned to the response given to God’s surprises, specifically the way that they bring people to hasten to him.

God’s surprises demand an immediate response, he said. The women hasten to the tomb. Peter and John run too, as did the the shepherds on the night when Christ was born. They say “Let us run to see what the angels have revealed to us.”

The Samaritan woman also runs to say to her people, “This is something entirely new. I have met a man who has told me everything that I have done—and the people knew what she had done,“ Pope Francis said.

Andrew did not waste time to go to Peter to say that he had found the Messiah. People leave whatever they are doing— “the housewife leaves her potato in the pot. Sure it will be burned, but the important thing is to see the manifestation of the proclamation.”

God’s mercy with the slow

Nevertheless, the pope added, there is one person in the Gospel who takes his time, who does not want to take a risk. This is Thomas. But the good Lord waited for him in the same way that he waits patiently for those people who do not get up and respond to the surprise right away.

Pope Francis’ third point was a question. What about me? “Do I have a heart open to God’s surprises?” Am I am able to go quickly, or do I always hang back and excuse myself until tomorrow.

“What does a surprise say to me?” Pope Francis asks. John and Peter ran to the tomb and the Gospel says they believed.

The pope concluded his homily saying that now it is our turn to ask, “What about me today in this Easter 2018. What about you?”

He noted many of the most-suffering places in the world, including Syria, Yemen, Venezuela and others.

But at the end of his address, he affirmed: “Death, solitude and fear are not the last word. There is a word that transcends them, a word that only God can speak: it is the word of the resurrection. By the power of God’s love, it ‘dispels wickedness, washes faults away, restores innocence to the fallen, and joy to mourners, drives out hatred, fosters concord and brings down the mighty.'”

“Happy Easter to all!,” he concluded.