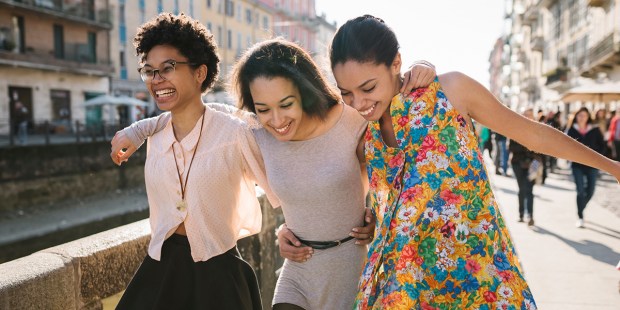 Not every friendship will be deep or last forever — and that’s okay.

I brought my coffee mug to my lips. “How long can I make this look natural?” I wondered as I used a long deliberate sip as cover for a moment of brain-wracking. Conversation topics were being dismantled like the Walls of Jericho and one by one, my gentle offerings deteriorated into uncomfortable silence until, “So, do you have any cousins?” actually crossed my mind as a revelatory question. This wasn’t quite the groundbreaking friend connection I had envisioned when anticipating coffee together. We were at a Pinterest-perfect rustic coffee shop and I had catalogued my brain with potential conversation starters sure to rouse a deep heart-to-heart. Clearly this wasn’t a friend connection.

And yet I don’t want to be the only girl playing Super Smash Brothers with my husband and his friends every week for the rest of my life. Five years ago I left Michigan with a plan to get a master’s degree and a promise I swore to myself, and every friend I tearfully parted with: “Just two years.” I left the friends who were kindred spirits, prone to Steinbeck-reading, whisky sipping, and Monty Python marathons. I left the women I grieved, rejoiced, supported, and prayed with. Four more cities later, and I have finally settled in Los Angeles. Trying to find a friend in this cement block of puffing smoke has left me lonely and dejected.

Through dozens of awkward coffee dates, hosts of “we should totally get together next week,” and too many layers of chit-chat to peel through, I have navigated the world of adult friendships, and it’s pretty much the worst.

But I have found solace in a sandal-wearing philosopher: Aristotle. In Nicomachean Ethics, Aristotle classifies friendships into three sorts: utility, pleasure, and goodness, in ascending order of worthiness.

For this type of friendship, Aristotle describes a relationship in which both people derive some benefit or usefulness from each other. They are “easily dissolved,” and shallow.

Read more:
The 8 types of women you absolutely need in your friend tribe

When I first moved to L.A., there were friendships I clung to, not with joy and freedom, but with desperation. The terror of not having companionship was worse than being with the wrong companion. And while I want to believe I value each of my friends for their inherent dignity, I recognize that I definitely have a ranking system, and utility is somewhere in the mix. There are the friends I may bail on if a “better option” comes along. The ones I’ll call because I have to see the new Wes Anderson movie and I don’t want to go alone. The friends I take Facebook pictures with to avoid silence, to have some proof of a social life the next day. Aristotle doesn’t condemn all friendships of utility as evil, selfish or wrong, but just asserts that of all the kinds of friends you could have, these are the lowest level. They serve a purpose but don’t give provide the greatest pleasure or meaning.

The second types of friendships are all about pleasure. These are the people we are drawn to. There is an energy, a kinship, a feeling of arriving home. You value the same things. You have the same tastes. These friendships are important. What would our college days be without finally finding those friends who valued the same weirdo hipster music as you did, or voted for the same politicians, or supported the same non-profits? These friends help us define ourselves. I had many of these friends. I remember the living-room forts we slept in the week I broke up with my boyfriend; I remember driving through a blizzard to comfort a grieving roommate at a funeral. And of course, the countless nights of 30 Rock marathons and clothes swapping that are like the grafting of two souls.

Once more Aristotle doesn’t denounce these friendships, but believes that they can be short-lived, as our needs and pleasures are likely to change over time. He calls them friendships for the young. Because these people can make you laugh, feel affirmed, and have an identity, but they might not make you grow. To grow, you need “the good.”

The thing about “goodness” friendships is that you won’t see them if you don’t want them. They may come in different packages than your other friendships. You may judge these friends. She might hate parties. Or movies. You might disagree on just about every pop-culture phenomenon under the sun. I did with my goodness friend. I didn’t notice her the first dozen times I met her because of these qualities I deemed foreign and incompatible. But how miniscule and endearing these differences seem to me now.

There were nights where she lifted my spirits in my most dismal times and pointed me towards paths of hope. In the months before my marriage, she emotionally prepared me with her strength and wisdom in a selfless way that I’d never experienced before. When I was an uglier version of myself, she demanded more strength in my virtue. And while I originally wanted the concert buddy and personality twin, she was giving me deeper character formation that I had not yet learned to call a friendship. The moment I finally did, to my sorrow, I moved.

We all remember the Frog and Toad book from our childhoods, the unlikely friendship between two strikingly different amphibians. Find your toad. The friends of goodness may take more searching. It may take nauseating book clubs, or even worse, bowling outings. Elevate yourself above your need for a buddy and look for a true comrade. Look for the friend who will raise their eyebrows when you’re making a mistake, light a fire in you when you’re not pursuing your dreams, and offer silent support when you need company. When you find these friendships, you realize they are the most valuable. A friend of this kind, in the words of Aristotle, “cannot be matched.”