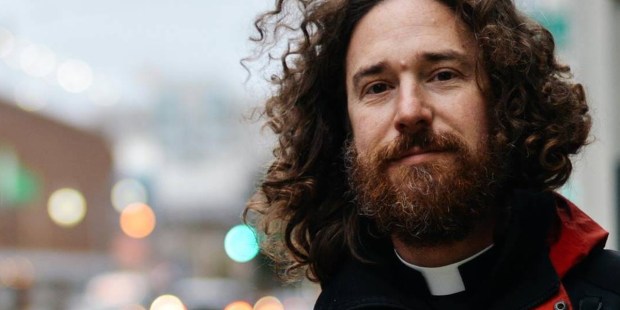 Fr. Peter Mussett takes his man bun and cool attitude to the streets of one of US’s most secular cities.

Boulder, Colorado, has a lot going for it. It’s been listed among the Ten Happiest Cities by CBS Moneywatch and one of the Top 10 Healthiest Cities to live and retire in by AARP. The city is blessed with stunning natural scenery and a temperate climate.

But for people of faith and traditional sensitivities, living in Boulder can be a challenge. Gallup in 2013 found it to be one of the least religious metropolitan areas, with only 17 percent of its residents classified as very religious.

“Boulder is known as a spiritual vacuum of sorts,” said Paul Spotts, founder of the Colorado-based ministry Catholic Young Adult Sports. And things like new age and Buddhist spiritualities, witchcraft and drug use seem to have filled that vacuum. “It’s very open to everything, but it’s super liberal,” Spotts said. “So as long as it’s not conservative, it’s open to it. It’s a big pot community, and the university is a huge party school.”

There has long been an annual “420 Festival” on the campus of the University of Colorado at Boulder, where participants gather on April 20 and begin smoking marijuana at 4:20 p.m.

The city also has one of the nation’s top-performing late-term abortion clinics, Spotts added.

It would seem, then, that someone like a Catholic priest trying to spread the faith might be as welcome as an idling automobile next to one of Boulder’s celebrated bike paths. And, in an age when more and more people simply have no interest in organized religion, is there even a common language for those of faith to speak with the radically secularized?

Fr. Peter Mussett thinks so. The 40-year-old pastor of St. Thomas Aquinas in Boulder is not content to quietly tend his own flock and just pray for those who might be considered “lost.”

A self-described “free spirit,” Fr. Mussett tries simply to “be himself” in order to open doors with people who are “different.” Locally, he’s been dubbed “the hipster priest” due to his easygoing ways and his sporting of a beard and “man bun.” He has so many wide and varied interests and hobbies—from judo to collecting salt from around the world—that he’s bound to hit it off with just about anyone he bumps into in Boulder.

Fr. Mussett’s parish territory includes the University of Colorado, and the priest is actively involved in campus ministry, working closely with the Fellowship of Catholic University Students (FOCUS).

“He’s not afraid to be himself in having really unique hobbies and interests, and he allows that to be a bridge in making connections to people,” said Hilary Draftz, who oversees a number of FOCUS chapters in the Western United States and got to know Fr. Mussett when she was a student in Boulder. “He’s excited about anything you’re excited about and he’s thrilled to share all the things he’s passionate about, which is primarily our Lord and the faith, but also all these hobbies.”

“When I was at Denver, he had a friend who helped him soup up a jeep, and he would take it off-roading on the weekends, or weekdays, whenever he could,” said Spotts, who had been in seminary with Fr. Mussett. “So in the offroading blogosphere he became known as the offroading priest. That’s part of his reputation.”

Luke Hicks agreed that when Fr. Mussett has a hobby, “he goes all in.” Hicks, a native of El Paso, remembers being new at St. Thomas.

“The first week we were here he comes up to me after Mass and taps me on the back and says, ‘Hey, come with me.’ I said ‘Okay,'” said Hicks, who is now a FOCUS missionary at the University of Colorado. “So I started walking with him, and we were outside and he said, ‘Do you feel that?’ And I’m like, ‘Noooo, what exactly do you mean?’ And he said. ‘The wind. Do you feel the wind?’ And I said, ‘Oh yeah, I feel the wind.’ He said, ‘We’re gonna go fly some kites.’ So he takes me to the park, and he has like the most intense kite that I’ve ever seen. I got to fly that for the next couple of hours, which was super cool—I’ve never done anything like that in my life. He makes his own kites too.”

For all his “playing around,” Fr. Mussett is serious about salvation—for everybody.

“My deepest desire for anybody is to know, to love and to serve Jesus Christ in this life and the next,” he declared in an interview.

His appearance and his behavior often are the means to open the door to a conversation that he hopes will lead to that.

Of course, not every priest assigned to a mission field like Boulder needs to grow a man bun. From all accounts, Fr. Mussett is not trying to be someone he’s not, simply to appeal to Boulderites. He’s simply being himself.

“The funny thing is, when I was in seminary, everybody thought I was from Boulder because I’m kind of a free spirit,” he said. “I just enjoy a lot of things, … and I think people recognize the freedom in me. And when people think about Boulder they think a lot about freedom.”

Asked about a recent article that dubbed him a “hipster priest,” he confessed, “I don’t mind humbling myself to being called that, if it’s for the salvation of souls. … It’s fun. It’s a little bit tongue in cheek.

“In a certain sense, the way I portray myself is a thing I want to be able to utilize so that those who maybe aren’t at ease approaching the Church might have a boundary removed because I look like someone they know,” he said.

What’s important is what comes after the initial encounter—how he treats the people he meets. He said he was heavily influenced by a 20th century philosopher, Dietrich von Hildebrand, whose book, The Art of Living, he read on the recommendation of his brother, an ethics professor.

“The first chapter of that book is called ‘Reverence.’ Dietrich von Hildebrand defines reverence as allowing a state for being to reveal itself,” Fr. Mussett said. “So, I’m an artist. I love drawing, I love sculpting, I love taking photographs. And I’m trained as a photographer. One of the things that you learn to do as a photographer is not just see what you want to see, but you have to learn to see what’s really there. And I learned that inside of my own soul I had a lot of irreverence about how I approached the world.”

“And God like broke into my life and almost forced my hand at seeing what was really there, not only through my training as a photographer but in my religious experience,” he said.

The priest said he is “so delighted when I get to know somebody in the truth of who they are. It’s the personalistic principle. A person is never merely a means to an end but always an end in himself. So to be reverent to people and allow being to reveal itself and not to presume to say that I know who they are, I get a chance to know so many wonderful people.”

Josh Ivie can attest to the effectiveness of this approach. When he was a student at the University of Colorado and looking into becoming Catholic, he said Fr. Mussett was “incredibly different from what I had expected.” The kind of person and priest he was greatly influenced Ivie’s and his wife’s decision to enter RCIA, or the Rite of Christian Initiation for Adults, a formation program for those wishing to become Catholic.

Ivie remembers the first time he had a conversation with Fr. Mussett: “You could tell that he was just completely listening,” he said. “He wasn’t preparing the next thing he was going to say—he was completely attentive to what I wanted to tell him. Coming from a world where everyone you interact with wants something from you to someone who completely listens just stopped me in my tracks.”

Draftz has her own take on Fr. Mussett’s approach. “You have to love people. You can’t just walk into that culture [in Boulder] and judge it and just think about how these hippies just love the environment and neglect God,” she said. “If you walk in with a judgmental attitude like that, there’s no way to reach anyone. But Fr. Peter really just enters into it. He truly is a missionary in the sense that he becomes one of the people there, and he just lets the light shine.”

Once you’ve made the connection, though, how can one talk about the faith to those who don’t even believe in God? The first step is not to presume to know what’s really going on with a person, Fr. Mussett insisted.

“People often say ‘I’m spiritual not religious.’ In a certain sense you have to reacclimate to not just judge that and raise the red flag and think, ‘Okay, here’s another baloney line,’ but to allow somebody to actually be spiritual but not religious,” he said. “Or to not presume that this is just a way for them to stop the conversation. Okay, sometimes it is; sometimes people just want to shut you off and not have a conversation. But a lot of times people will say, ‘My cathedral is the woods.’ One of the hardest things to do is: how do you allow that to be an invitation to have a real conversation?”

He points to the students who are involved in FOCUS and campus ministry as good examples. Because of the relationships they had formed, they were able to get five atheists to attend a recent retreat the parish held.

“Five people who didn’t believe in God, who have enough of a relationship with a person and enough interest in what was moving within their hearts that they were willing to give a whole weekend to a retreat with adoration, confession, Mass, talks about the necessity for God in your life,”  Fr. Mussett marveled. “How do you encounter somebody in such a way that you can allow them their personhood without having to make them into a project?”

It’s important, he added, to have the patience to let people be where they are “and yet at the same time have the courage to share where I really am … not as some sort of pious mad dog, and not trying to present merely what I think is going to be attractive to them but to share with them the truth of my own life. … I really think that’s the key: we’re not just proselytizing, we’re evangelizing, which is the difference between thinking that I can merely give an answer for somebody in their life versus walking with them in their life and sharing life and having enough courage to share life with somebody who is the responsibility of God.”

Fr. Mussett said he feels “very privileged” to be in Boulder, “to bring the light of Christ wherever he would have me bring it. I think Boulder, oddly enough because it’s farthest from the Lord in many ways, can be a place where people can receive him the best.”