Jerry Seinfeld is my marriage therapist 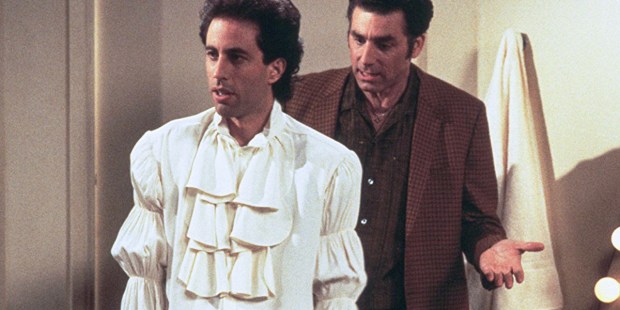 Never underestimate the power of laughing together.

A funny thing happened the last time I was in labor. My ever-serious husband, one whom prefers reading books to watching TV — books about light things like politics or religion or rocket science, books written by dead people, often in dead languages – this husband of mine, he started … laughing. Hard. And loud. Like spit your soda at the nurse, loud.

Sure my husband smiles and chuckles at our kids every day, but I hadn’t heard him wheeze and turn red and slap his knee and gag and guffaw in forever and ever. Truly, it was such a beautiful sound, I paused mid-contraction to glance up at the TV where a comedian I lost touch with in the ’90s was dressed in a piratey-looking puffy shirt. And here’s the best part: even though I was pushing out a kid with a head the size of a mango … I started laughing too.

At first my doctor thought we were nuts. “Seinfeld?” he said in his Brooklyn accent, which was incredibly appropriate for the moment, “Didn’t you watch this like two decades ago?”

But then my doctor glanced at the screen … “Oh, the puffy shirt!”

And he started laughing too. One by one the rest of the medical professionals in the room dropped like flies — neglecting their duties and the half-dressed lady on the delivery table to crack up at Kramer who’d just walked into a wall. I didn’t mind a bit — and it wasn’t just because of the intravenous drugs pulsing through my veins. I, too, was drawn into the popular episode of the 90’s comedy, the one where Jerry gives an interview at a fundraiser wearing a ridiculous outfit designed by Kramer’s girlfriend — one he unknowingly agreed to wear because Kramer’s girlfriend is a “low talker” and he hadn’t understood her request.

So we had a delivery room full of laughter, and the happy memory stayed with me even after we brought home our precious baby. It also reminded me of the advice my devout Catholic mother gave me before my wedding. This faithful woman who’s been married to my eccentric father for 45 years, who attends daily Mass, raised six children and helped run a family business, offered this piece of soulful wisdom for a happy marriage: “Watch Ferris Bueller’s Day Off with your husband.”

Read more:
A simple formula to rejuvenate your marriage in 2 days

She went on to explain how she’d recently come home from a stressful day to find my dad watching this classic ’80s movie. She described how the sound of his laughter was like good medicine. Joining him on the couch, they shared a glass of wine and all their stress from the day evaporated. [Note: The TV shows and movies mentioned in this article contain adult situations and should be watched with a remote control in hand – go ahead and fast forward if it gets too lewd. “Eat the fish and spit out the bones” – that’s also some advice from my mom. Of course, none of these programs are appropriate for children.]

Lately, my husband and I have had date nights watching reruns of Seinfeld on Hulu. The “Buttershave” episode, where Kramer decides to shave with butter, is a gem and typifies the sitcom’s brilliance – a comedy about nothing. We also branched out to Seinfeld’s newest show, Comedians in Cars Getting Coffee, a program on Netflix in which Seinfeld picks up fellow comedians – always in a classic car — for a chat over a cup of coffee. The show’s laid back, spontaneous humor and short 15-minute segments work really well for a couple with limited time to relax together.

Last night, we watched the episode where Seinfeld picks up David Letterman and takes him to a local café. They have a sweet discussion about family life, specifically about raising kids and the effect it has on a marriage.

“In 60 years, almost everyone in this room will be dead” was Seinfeld’s logic when it comes to choosing his battles carefully, and thus avoiding fights with his wife. Letterman’s face fell macabre, and he jokingly asked for the bill. But for us, for this married couple struggling to eke out a gracious existence, the advice was sage – also, it’s biblical: “Man is like a mere breath; His days are a passing shadow.” (Psalm 144:4)

“God bless him!” my husband raised his wine glass to the TV screen, and we went on to binge-watch a few more episodes. Because Jerry Seinfeld is my marriage therapist, and there’s something really awesome about a husband and wife simply laughing together.