What is love? And is there really an app for that? 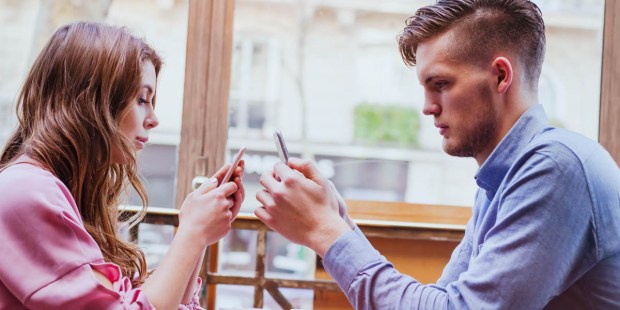 Dating apps can be useful tools for finding a mate, but by limiting the scope of one’s prospects they limit one’s capacity to love.

We like whom we like for all sorts of reasons. Some of them, like physical attractiveness or sense of humor, we understand, while others, like a quirky habit or endearing laugh, we don’t. It’s usually the latter—the strange oddities that reveal a significant other’s inimitable humanness—that sweep us off our feet. But since these discrete qualities are much harder to identify, we are usually left only considering the more obvious traits when initially searching for a romantic match. That’s exactly where modern dating apps and websites can play a part in helping many identify and pursue their “type.”

An article in The Atlantic, “Spotify Is Trying to Become the Music Platform of Modern Dating,” highlights another possible point of convergence for single people looking for a compatible companion. Tinder users can label a song their “Tinder Anthem,” allowing potential matches to play the song through Spotify. Additionally, Tinder users can see if a possible match shares the same taste in music by perusing their Spotify playlist. So, someone who likes broody acoustic or fringy electronic might be worth considering as a possible match.

Read more:
‘The Dating Project’: Why this professor makes her students go on dates

This reminds me of a film that came out a little while back, titled The Lobster, featuring Colin Farrell and Rachel Weisz. The film casts an interesting—and at times disturbing—glance at the notions of compatibility, singleness, and human love. In the dystopian film, single people are required to find a “reasonably” compatible mate in order to avoid being irrevocably turned into an animal of their choosing (like, for example, a lobster). In the film, the uncoupled are taken to a hotel outside of an unnamed city where they are given a limited amount of time to find a mate so that they may be reintroduced into society. With stiff characters set in an eerie setting, the film aggressively takes the form of a dark comedy. The unfortunate singles, due to their fear of being mysteriously altered (the film implies this is done through some type of medical procedure and not occult magic) into an animal, are forced into wresting a suitable mate based on the most trivial of shared traits, such as nearsightedness or regular nosebleeds. A sharp and focused lens is placed over our culture’s current customs regarding dating and relationships, forcing us to examine how we go about pursuing another person and what motivations and fears we might unknowingly be harboring.

The modern dating scene, which often employs the help of complex algorithms, allows us to find matches based on a list of prescribed traits. Like the dreary hotel in The Lobster, dating sites and apps provide a type of virtual venue where we can search for like-minded and like-hearted matches. This raises an important question, however: how has the modern dating scene, and the role technology plays within it, affected our understanding of love? Or more specifically: How has our modern take on relationships, both romantic and not, affected our ability to fulfill the command to love our neighbor?