This hermit-nun hasn’t spoken for 16 years. But here’s what she tells us 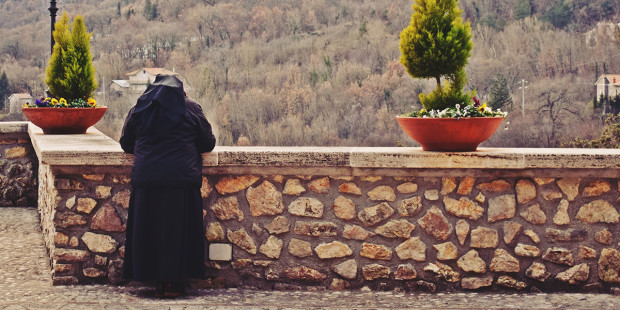 Sr. Miriam of the Cross says she has the deepest friendship possible.

Sr. Miriam of the Cross belongs to the community of nuns in the Carmelite Convent of Merciful Love in the Polish city of Szczecin, but she did not want to be an “ordinary” nun and thus chose the life of a hermit.

How can we understand her choice in a world that is so allergic to silence?

This woman leads an incredible life, some might say an unnatural life. It is unnatural in that we are created as social beings, to be in relationship with others. Without relationships, life could result in a mental illness. But Miriam of the Cross, with 16 years of silence, can tell us a lot.

What is her message? We can read it in her publications and learn about it from those who have met her.

For her fellow-nuns in the Szczecin convent she is the one who supports them with her silent prayer and testifies to the value of silence, offering a chance for a profound encounter with God. For the people around her, she is a question mark and sometimes an exclamation point.

Her hermitage is a small hut separated by the enclosure wall from the Carmelite convent. Contrary to what we might expect, it is not located in the depth of some woods or in a far-flung corner of a remote village, in an inaccessible place. Nothing of this sort.

The Carmelite Convent of Merciful Love, where Miriam’s hermitage is located, is a hallmark of the Szczecin district of Golęcin. Right outside its walls we can find a primary school, an oncology clinic, a retreat house, a parish office and a presbytery, as well as an outpatient clinic and a night shelter run by Caritas, the biggest Polish charity run by the Church. It is, then, a place surrounded by the hustle and bustle of daily life. And it is here that we can encounter the only woman in Poland who has taken the vow of perpetual silence.

This is what she herself writes about her experience:

It is extremely difficult to express in words how happy your life in friendship with Our Lord and in incessant contact with Him is. Oh, what a faithful, generous, tender, gracious, humorous, ingenious, and loving Friend He is! This is a friendship that satisfies all the desires of the human heart, one that heals all wounds and liberates you from all limitations. He takes pity on our weaknesses and shows unsurpassable generosity.

Sister Miriam entered the Carmelite Convent in Częstochowa. She arrived in Szczecin 35 years ago, in 1983, entrusted with a mission to establish a new community. After some time, she came to the realisation that God was inviting her to do greater things.

And she followed her call, crazy as the idea seemed. Since the Vatican Congregation for Institutes of Consecrated Life expressed an opinion that it was impossible to lead the life of a hermit within the Carmelite spirituality, Miriam was released from her vows in the Carmelite Order and on February 28, 1988, took the vows of a hermit before Bishop Kazimierz Majdański. In 2001 she took her vows of perpetual silence.

The nun, who has for the past 30 years lived in the hermitage of the Most Holy Heart of Jesus, is really amazing. Iga, who often used to visit the Szczecin convent, observes as follows: “Her face is really like the sun! I met her on the feast of her patron saint, where she could be approached with best wishes. If one can read the state of the heart in someone by the look of their face, I can say that she is truly peaceful at heart. This was a short but memorable encounter. I would be responding to the questions she … was not asking. I had the impression that this was a dialogue during which she was asking what my name was, what I was doing for a living, and I was just answering those tacit questions. Miriam has a profound, gracious, passionate, and dynamic gaze.”

In the early 1990s Sister Miriam was entrusted with one more mission, similar to the one that had brought her to Szczecin. For three years, at the request of the local bishop, she supported a newly established congregation of the Sisters Disciples of the Cross. She became the head of the board of the congregation and made an indelible imprint on its spirituality. That was her last “external mission.”

A few years ago, in 2013, Miriam donned a hermit’s robe, a kind of scapular, symbolic of a voluntary adoption of humiliation and suffering for the glory of Jesus and the salvation of other people.

This marked the third, highest level of the monastic profession, originating in the Orthodox tradition, signifying an entry into a state close to that of angels and adopted on very rare occasions.

Why am I silent?

What does the life of the hermit look like today? The sister mainly prays, fasts, takes part in Holy Mass in the convent chapel, and paints icons. They can be found not only in the Carmelite convent chapel, but in many different locations. These are veritable works of art, a beauty born out of a profound silence.

In a letter titled “Why I am silent,” published in Więź monthly (11/2006), Sr. Miriam observed that she is certain about a close relation between silence and speech.

“Is not the vow of silence against human nature? I pose this question to myself, too. Without a doubt, silence is so hard for our nature, also for me. However, human social life is possible thanks to a certain dialectic of silence and speaking, contemplation and engagement, breaking free from worldly desires and enjoying the world, etc. Therefore, the role of silence in interpersonal communication, in relationships, seems crucial and actually necessary for obtaining some harmony. It is communication that takes place within the human spirit, where mindfulness, gentleness, attentiveness to the other, warmth, and respect originate. There is a close correlation between silence and speaking, as all is born out of silence.”

Her life, although it seems unimaginably difficult, is also a magnificent message about the existence of Mystery, which cannot be fathomed.

Read more:
Who was the first Christian hermit?