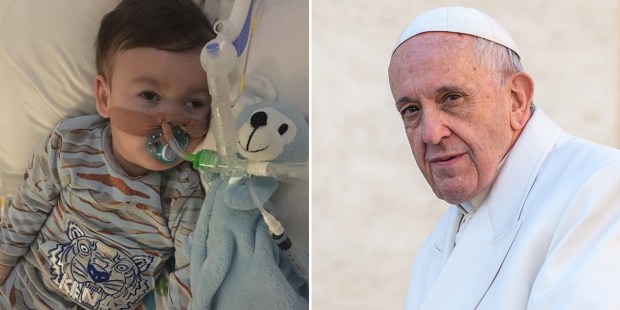 The Italian Ministry of Foreign Affairs has granted citizenship to Alfie Evans, the seriously ill British toddler who has been at the center of a legal battle over whether his parents have the right to continue to keep him on life support, according to a BBC report.

Last February a British court ruled that the Liverpool hospital where he is being treated could shut off his life support despite his parents’ wishes to continue his treatment. The 23-month-old Alfie suffers from a degenerative brain disease, encephalomyopathic mitochondrial DNA depletion syndrome. The disease, which causes brain damage and an inability to move the limbs, has no known cure.

Alfie’s parents, Tom Evans and Kate James, want to take him to the Vatican-run Bambino Gesu Pediatric Hospital to continue his care, despite a European Court of Human Rights (ECHR) ruling that a request to move him would be “inadmissible.”

Last  week Alfie’s father flew to the Vatican to meet with Pope Francis who later offered mentioned Alfie’s case and offered his support at the Wednesday Audience. Today he reiterated his support for Alfie in a Tweet.

Moved by the prayers and immense solidarity shown little Alfie Evans, I renew my appeal that the suffering of his parents may be heard and that their desire to seek new forms of treatment may be granted.

In his remarks last Wednesday, the pope said, “it is our duty to do all that is possible to safeguard life.”

He asked that everyone pray for “people, such as Vincent Lambert in France, little Alfie Evans in England, and others in different countries, who have been living, sometimes for a long time, in a condition of serious infirmity, (and are) medically assisted for their basic needs.”

These “delicate situations,” he said, are “very painful and complex. Let us pray that every sick person may always be respected in their dignity and cared for in an appropriate way for their condition, with the unanimous contribution of family members, doctors and other health-care workers, and with great respect for life.”

The BBC reported that Lawyers from the Christian Legal Centre, who are representing Alfie’s parents, do not know whether Alfie’s new Italian citizenship will save him.

“The Italian ambassador has urgently contacted the court with a request for the Italian government to be allowed to intervene in the case and seek the return of their citizen Alfie Evans to Italy,” they told the BBC.

“We don’t know what the response will be and whether it’s going to stop the withdrawal of treatment here.”