This mom of 16 homeschools, blogs, and runs a charity 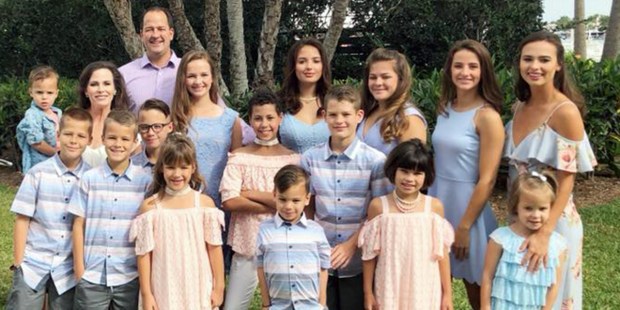 Lyette Reback’s success is partly due to the first thing she does every morning.

When Lyette Reback married her husband, David, at the age of 20, little did she know that some 24 years later she’d be a mom to 16 children: 12 biological and 4 adopted, with ages ranging from 2 and 22. Yet not only does this mom and charity worker from Florida homeschool her tribe of 10 daughters and 6 boys, she also manages the 88 weekly drop-offs to sports practice, ensures the smooth running of her house (that includes 42 loads of laundry a week!), tucks each child into bed each night, offers advice through her blog, The Rebacks, meets up for dinner with friends, and finds time to work out.

Reback says she’s not sure if she’s finished having kids, never having “put a number on it,” taking it “one day at a time.” Yet, one thing is sure, along with her estate agent husband, David, 49, Lyette feels “blessed to be able to have children and we really, truly believe that raising children is an incredible opportunity to do something amazing in the world.”

Talking with Fox News, Lyette shares: “I wake up each morning and think, ‘I can’t believe I get to do this. Raising children is the best job in the world.'” With the Reback family having five times the average number of children per family, there have been times where the family’s size has been met with disbelief and ridicule, but as their older children have become successful, Lyette is no longer deemed such a “weirdo.”

An ordinary day for the family

One of the reasons for the smooth functioning of the family is down to Lyette’s daily regimen. Waking up at 5:30 a.m., Lyette begins her day with prayer. After detailing those all-important to-do lists, she is ready to attack the homeschooling, tackling a myriad of subjects from math to art. Kids are also ferried to and from their sporting activities, which can total 88 trips in just one week. And there’s all the groceries to be considered and bought, totaling a weekly $650 shop.

What my breakfast table looks like most mornings. Not perfectly set, most times the meal is cold before I sit down, but these faces are the reason for everything I do.

However, one of the main reasons for the family’s success is the Rebacks’ strong work ethic. Lyette wants to instill in her children the importance of everyone chipping in. Each child is given a chore, such as 13-year-old Trinity serving up three meals a day, with the help of her 11-year-old sister Liberty acting as sous-chef. Carson, aged 12, is in charge of laundry and takes his role “seriously,” and along with his brothers who help out, we’re pretty sure this group of capable siblings are never-faced with the odd sock dilemma!

“They’re human beings, not robots, and it isn’t always perfect or pretty but that fact is the same whether you have two kids or 20,” Lyette recognizes. As well as schoolwork and chores, the children also help with their mom’s charity, Believe With Me, for military families who’ve lost loved ones though service. As a large family they not only learn to look after one another, but to think of other families who are not as fortunate.

If all that isn’t enough, Lyette also puts pen to paper, or more likely, taps away on her keyboard, and blogs about family life, offering advice on all those different childhood stages, as well as marriage. For the couple who got engaged just 10 days after dating, the family has grown from strength to strength, while thinking of others along the way. She blogs: “When David and I got married, we both believed in Jesus but we barely knew what that meant. As we added children to our family, we quickly grew in our faith.”