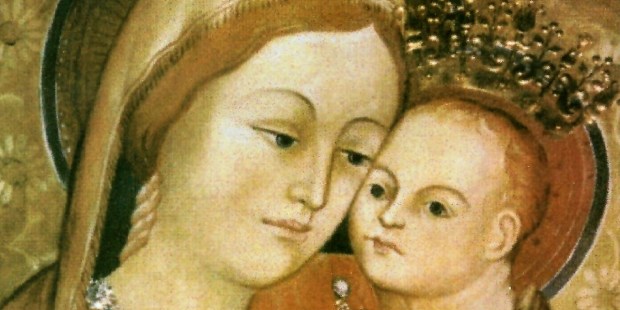 Over the centuries the image has been the source of countless miracles.

In an Italian village outside of Rome there was a church built in honor of Our Lady of Good Counsel that had fallen into severe disrepair. The people of the city did not have enough money to restore the church and so they waited and prayed for a miracle.

Then, according to a popular legend, on April 25, 1467, before a Mass in honor of St. Mark, the people of the village witnessed a marvelous site. They heard melodious music coming from up above and as they looked, they saw a white cloud of such luminous beauty. The cloud slowly descended and eventually hung over a wall in a side chapel of the church.

The cloud began to vanish and in its place, there remained a miraculous image of Our Lady. Almost immediately the sick were healed. Ever since the image and devotion to Our Lady of Good Counsel has obtained countless healings.

Yet, while the image came down from the sky, the painting was a real painting that was miraculously transported from a church in Albania. After several military defeats, it was feared that the church would be destroyed and the precious image desecrated. Two men then witnessed the image of Our Lady lift off the church wall and fly off into the sky. They followed the image and eventually came to Rome, where they saw it disappear.

After inquiry, it was discovered that the image from Albania was the one that came down in the church of Our Lady of Good Counsel.

Whatever the exact origins of the image may be, the image is one favored by Christian faithful around the world and many miracles continue to occur through the intercession of the Blessed Virgin Mary under her title of Our Lady of Good Counsel.

Read more:
Struggling with a decision? Try this prayer