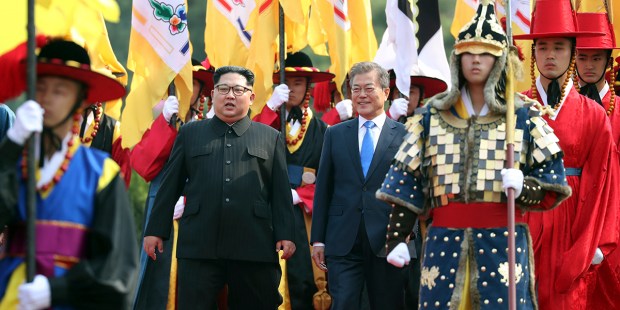 The leader of North Korea, who just weeks ago was the embodiment of a global nuclear threat, walked across the border with South Korea Friday and agreed with his South Korean counterpart to work to denuclearize the Korean Peninsula. Kim Jong-un and Moon Jae-in also agreed to pursue talks with the United States within the year to declare an official end to the Korean War, which has only been suspended by a 1953 truce.

It was the first time a North Korean leader had ever set foot in the South.

“South and North Korea confirmed the common goal of realizing, through complete denuclearization, a nuclear-free Korean Peninsula,” read a statement signed by Kim and Moon, after their meeting at the Peace House, a conference building on the South Korean side of the border village of Panmunjom.

Their declaration included promises to pursue phased arms reduction, cease hostile acts, transform their fortified border into a peace zone and seek multilateral talks with other countries including the United States.

“The two leaders declare before our people of 80 million and the entire world there will be no more war on the Korean peninsula and a new age of peace has begun,” the two sides affirmed.

The two had met at the border, shook hands and had a quiet, 30-minute talk.

“I came here to put an end to the history of confrontation,” Kim declared.

The two leaders, noting that this year marks the 65th anniversary of the armistice, agreed that Moon would visit Pyongyang in the fall and that within a year, they would push for a conference that included the United States and possibly China to replace the armistice with a peace treaty.

Kim and Moon also agreed to open a liaison office in the North Korean border town of Kaesong and arrange a reunion later this year of families separated by the war.

The move to end the Korean War formally would face obstacles, including the fact that each country declares itself the rightful government of the entire peninsula, the New York Times pointed out.