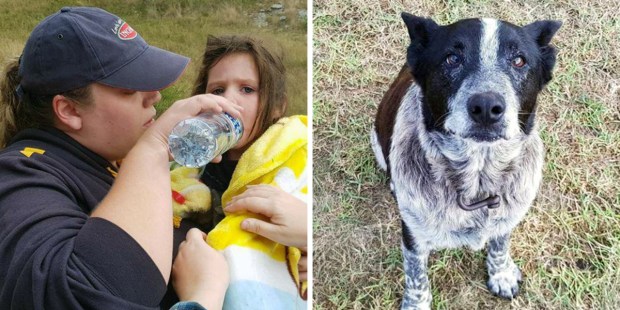 The 17-year-old dog put his own life at risk to ensure the safety of a little adventurer.

There’s a very good reason why dogs are often referred to as “man’s best friend.” Not only do they offer great companionship, they sometimes put their own lives in danger to help others. This was the case for a deaf 17-year-old cattle dog called Max, who also happens to be partially blind, when he helped save a three-year-old girl who wandered off into the Australian bush.

When an adventurous little Aurora left the family home last Friday afternoon, she ended up more than a mile away, lost in the rain, with temperatures reaching below 50. By her side was Max, who kept her company through the night as she slept, despite the horrible weather conditions and his advancing age.

The panicked family had notified the police of their missing daughter at 3 p.m. that same Friday afternoon, according to news.com.au, and it was only the next morning that she was found during an extensive search that involved over 100 volunteers. Aurora’s grandmother, Leisa Marie Bennett, had “faintly heard” the young girl who had taken refuge on top of a mountain on the family property, and when she went to look for her, an attentive Max left the three-year-old to alert the grandma to their whereabouts.

Max, a Blue Heeler, has been hailed by the Queensland police as an “honorary police dog” for his efforts in keeping her safe. As for the little explorer, Ian Phipps who was the area controller of the rescue, shared that “she’s OK. Few scratches from brush but wasn’t even scared,” probably because she had her faithful friend by her side.

Many animal lovers have remarked that dog is “God” spelled backward, and seeing Max’s guardian angel qualities, we can understand God’s hand in Aurora’s safe return.