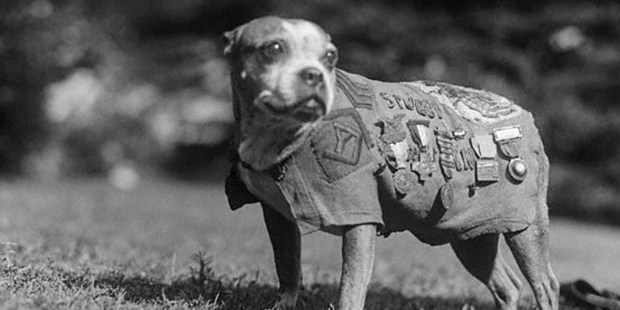 Don’t miss these movies in which “man’s best friend” show us why we love them so.

As much as we love our dogs, it’s a rare pooch that truly earns their keep. Sure, they’ll bark at the occasional stranger, but they’ll bark at the occasional butterfly, too. They may run with you, but they’ll run away from you, as well — especially if they see a passing squirrel. They dig. They chew up furniture. They may be like family, but last time you checked, I bet your Aunt Edna didn’t rip apart your favorite throw pillow or leave a special “gift” on your living room floor.

But as a new movie out this past weekend, Sgt. Stubby: An American Hero, reminds us, sometimes dogs can put the “wow” in the bow-wow-wow. They can save lives, capture German spies, perform incredible feats of athleticism and be so loyal as to jerk a tear or two. They can be so amazing, in fact, that sometimes we can’t help but make movies about them.

Let’s take a look at some real dogs who were so amazing that we can enjoy watching their exploits — through movies or TV — anytime. And let’s begin with the newest Fido to get his own film …

Many a dog has served with distinction in the military, but few can match the exploits of this one-time stray. Stubby showed up on Yale University’s military training grounds in 1917, just as America was preparing to enter World War I. Robert Conroy took him under his wing and, after he taught Stubby to salute the commanding officer, the Boston Terrier became the regiment’s unofficial mascot. He was smuggled aboard a troop ship to France and quickly became an indispensable part of the unit — scampering into no-man’s land to find injured soldiers, warning troops of gas attacks, serving as an all-around morale booster and even capturing a German spy by biting the poor guy on the rump. It was for this last act of derring-do that Stubby earned his unofficial promotion to sergeant and sent him home an honest-to-goodness war hero. A veteran of 17 battles, Stubby lived to a ripe old age. And when the animal did die, his remains were sent to the Smithsonian.