Why breastfeeding in public makes me so uncomfortable 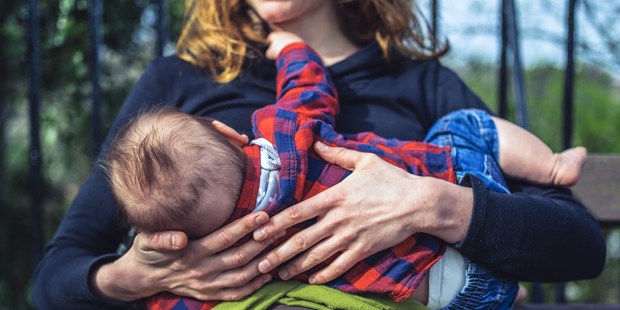 Most people are just trying to be nice, but it’s just so … awkward.

I’m lucky enough to be making enough milk to feed quadruplets, and my infant is an awesome nurser. Not too wiggly, latches pretty quick, and doesn’t seem to mind eating her lunch with just her feet sticking out of my gigantic nursing cover. Right after she was born, she ate for so long that the nurses had to finally interrupt her to get her proper weight, and I remember thinking, “Yep, this is going to be easy.” But it hasn’t been as easy as I thought.

The world’s become a fairly breastfeeding positive place, which I’m grateful for. There’s none of the stigma that my grandmother had to deal with, where the practice was thought to be unhygienic and really only for people who couldn’t afford formula. I’ve never (that I’ve noticed) gotten angry looks for nursing in public, and nobody’s ever suggested, as they did to my mother, that “There are children here! Can’t you do that in another room?”

Still, I dread having to feed my baby anywhere outside of my own home. Mainly because it makes people so uncomfortable. Men and women both suddenly stop making eye contact, but I’ve noticed it most often among men. Don’t get me wrong, these are men who 100 percent support public breastfeeding, men who quite often have wives who’ve also nursed their children. They’re men who understand what a sacrifice it can be, and think breastfeeding is a beautiful thing. But they still don’t know where to put their eyes, because they’re trying not to make me uncomfortable.

I’d feel the same way. They don’t want me to think that they’re staring and make me feel self-conscious. And to be honest, I totally would feel self-conscious if I noticed them staring. It turns into a big, stupid, vicious cycle, because when they act uncomfortable at my potential discomfort, well, that makes me uncomfortable. And I feel bad for them! They’re actually just trying to be nice. I hate that the minute I get out that nursing cover, everybody suddenly starts looking at the floor.

The problem isn’t me, and it’s not them, either. It’s that public breastfeeding hasn’t become normal enough, in America, to develop very much etiquette around the practice.

Manners aren’t just some stuffy practice leftover from the Victorian era. They’re a real form of charity. They help us not offend or insult people who we don’t know very well, by offering us general guidelines of behavior. It’s not good manners to comment on somebody’s rash or acne, for example. You figure they don’t want to talk about it. You might not have to follow that rule with somebody you’re close to, though, if you know they actually won’t mind. It may or may not be good manners to ask somebody if they’re okay if you notice them crying, depending on whether they’re trying to hide it. We don’t generally learn this stuff from a book, we learn it by observing the world, watching other’s, and adjusting our behavior when people react badly. And we do it because we want others to be comfortable.

I’ve been tempted to quit public breastfeeding altogether, and just excuse myself to the bathroom when the baby’s hungry, but that’s not going to help anybody. This problem is the kind where the only way out is through. The more normal it becomes, the better chance there is that, eventually, we’ll all figure out some kind of universal etiquette for it, and none of us will have to think about it any more. Short term, we’re all just going to have to be uncomfortable, but long term, the more normal public breastfeeding becomes, the less it will stand out.

I generally try to act like what I’m doing is as normal as just eating, and I try to initiate a little conversation with the guys who aren’t sure where to look. They’re generally relieved. It’s how I try to show them they don’t have to be worried, they don’t have to look away. I know I’m not just helping myself out by feeding my baby in public; I’m also helping countless other mothers who are going to be doing the same.

Read more:
This new emoji could change everything for breastfeeding moms