Trump to withdraw US from Iran nuclear deal 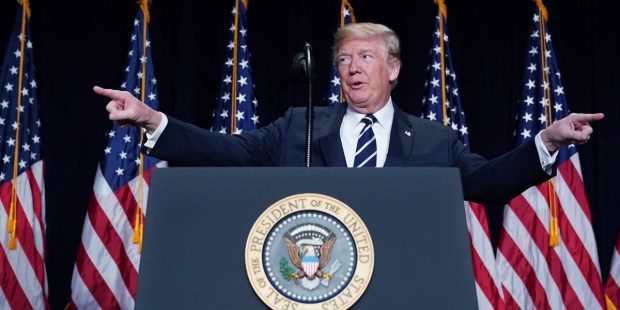 President Donald J. Trump has announced that the United States will withdraw from the deal his predecessor oversaw regarding Iran’s development of nuclear weapons.

Trump made the announcement in the Diplomatic Room of the White House Tuesday afternoon, with Vice President Michael R. Pence and National Security Adviser John R. Bolton looking on from a side door. The president called the Joint Comprehensive Plan of Action a “horrible one-sided deal that should have never, ever been made.

The president contended that the deal “allowed Iran to continue enriching uranium and over time reach the brink of a nuclear breakout.”

“The deal lifted crippling economic sanctions on Iran in exchange for very weak limits on the regime’s nuclear activity—and no limits at all on its other malign behavior, including its sinister activities in Syria, Yemen, and other places all around the world,” Trump said.

The accord was reached in July 2015 after more than two and a half years of negotiation led by the Obama administration. Trump, as a presidential candidate and as president, has long criticized the deal.

According to the Associated Press, the deal imposed restrictions on Iran’s nuclear program that make it impossible for Iran to produce a bomb, in return for the lifting of most of the U.S. and international sanctions against it:

Under its terms, Iran only can maintain a stockpile of 300 kilograms (661 pounds) of low-enriched uranium, compared to the 100,000 kilograms (220,460 pounds) of higher-enriched uranium it once had. Iran can only enrich uranium to 3.67 percent, which can be used to fuel a reactor but is far below the 90 percent needed to produce a weapon. The deal also limited the number of centrifuges Iran can run and restricted it to an older, slower model.

Iran has granted more access to International Atomic Energy Agency inspectors to ensure that its nuclear reactors are being used only for peaceful purposes. It does not directly stop Iran from testing or firing ballistic missiles, however. And it has a series of rolling expiration dates: in 8 ½ years, for example, the country can start testing up to 30 more advanced centrifuges, a number it can greatly expand two years later. In 2030, restrictions on Iran’s uranium enrichment and stockpile size end.

President Trump said the world has “definitive proof” that Iran’s promise to use nuclear technology only for peaceful purposes “was a lie.”

“In the years since the deal was reached, Iran’s military budget has grown by almost 40 percent,” he said, noting that the country’s economy is “doing very badly.”

“After the sanctions were lifted, the dictatorship used its new funds to build its nuclear-capable missiles, support terrorism, and cause havoc throughout the Middle East and beyond,” the president said. “If I allowed this deal to stand, there would soon be a nuclear arms race in the Middle East. Everyone would want their weapons ready by the time Iran had theirs.”

President Trump concluded his speech by signing a presidential memorandum to begin reinstating U.S. nuclear sanctions on the Iranian regime.

“We will be instituting the highest level of economic sanction,” Trump said. “Any nation that helps Iran in its quest for nuclear weapons could also be strongly sanctioned by the United States.”

National Review explained that after a three- to six-month delay period, the U.S. will reimpose the economic sanctions that were lifted in 2015. The conservative website added:

The White House released a list of demands following the announcement that will serve as a prerequisite to renegotiation. In addition to requiring that Iran abandon all efforts to develop a nuclear weapon, they must also cease developing inter-continental ballistic missiles, end support for terrorist organizations, and refrain from further escalating the conflict in Yemen, among other requests.