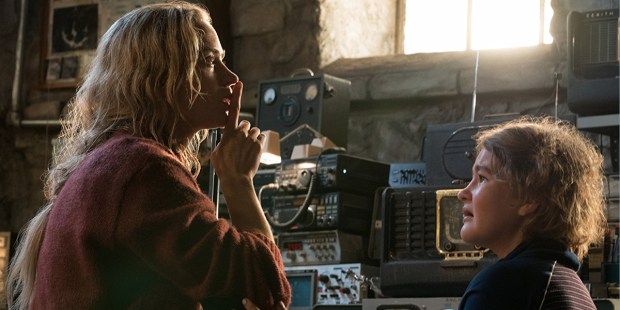 There are many ways to celebrate Mother’s Day, but how about kicking back and watching a movie about just how amazing moms can be?

Here we unveil eight movies with some very unusual mothers who touch us, inspire us, and might even make us laugh or cry. These films, most of which are readily available in theaters or streaming services, run the gamut of tone and content, but you may even find one of the list that you and your mother can watch together — especially if she’s a little quirky herself.

In a world filled with monsters who hunt by sound, Evelyn Abbott (Emily Blunt) is raising two kids and about to bring another into the world. Imagine: Giving birth in a place where the slightest noise might well turn you into a messy monster snack. But to Evelyn, this life growing inside her is precious beyond measure — as are the two children she’s already raising — and she’ll do her upmost to safeguard them all, in spite of the terrible risks. After all, as she tells her husband, Lee, “Who are we if we can’t protect them?” I’ve already written here about this gripping, strangely moving suspense narrative, but Evelyn’s worth a shout-out here: It’ll be difficult to find a depiction of motherhood that’s paradoxically so gentle and fierce.

In the opening moments of this mind-bending sci-fi flick, we meet Louise Banks (Amy Adams), the mother. In a short montage, we see her raising her daughter (Hannah) through the typical joys and frustrations of motherhood — and then experience the unimaginable pain of watching her die. The rest of the movie focuses on Louise Banks, the linguist, as she attempts to communicate with a strange, perhaps dangerous alien species. But the movie never loses sight of Louise the mother, and it’s there where the movie holds its real power. If you haven’t seen it, to say much more would be to say too much. But in the end, Arrival tells us that to love — to love as only mothers do — is worth it, no matter what trials or heartbreaks may follow.

Eleven-year-old New Yorker Oskar Schell (Thomas Horn) loved — no, loves — his dad. He was, Oskar felt, the only person who really understood him. But he’s dead now — killed in the attacks on 9/11. It’s just him and his mother, Linda (Sandra Bullock), and she doesn’t understand him at all. “I wish you were in the building instead of him,” Oskar tells her one day in spite. “So do I,” Linda says in a whisper. But when Oskar embarks on what he believes to be a scavenger hunt — one his father designed for him before he died — Linda embarks, too, secretly following him through the city, connecting with Oskar’s contacts before he even does himself. “Were you snooping on me?” Oskar asks. “I was searching for you,” Linda tells him. She finds him, too. Just as importantly, Oskar finds her, and realizes they share more than he ever imagined.

For years, Rose Maxson (Viola Davis) has floated in her domineering husband’s wake. When she learns that Troy (Denzel Washington) has been having an affair, her world falls apart. But then one fateful evening, Rose learns that Troy’s lover has died in childbirth. The baby survived and needs a mother. Would Rose be that mother? It’s an almost unthinkable favor that Troy asks, inconceivable in its desperation and cruelty. But Rose — caring, nurturing, mothering Rose — accepts the task, moving her allegiance from Troy to this child who is a reminder of his betrayal. But she agrees to love the little girl all the same. “From right now, this child got a mother,” she tells Troy. “But you a womanless man.”

Saroo (Dev Patel) was just 5 years old when he was accidentally whisked away from his home and family. Adopted by Australians John and Sue Brierley, he slips into a new life until a traditional Indian dinner reminds him of his old one. He begins an obsessive search for his birth mother, but it separates him from his adoptive one. Saroo wrongly assumes that he was adopted because the Brierleys (as Saroo puts it) “couldn’t have [their] own kids.” Sue (Nicole Kidman) is shocked. “We wanted the two of you,” she says of he and his brother. “That’s what we wanted. We wanted the two of you in our lives. That’s what we chose.” And Saroo suddenly understands: Sue may not have given birth to him, but she’s his mother all the same — as loving and as giving as a mother could ever be. Lion offers a powerful message about the beauty of adoption, and that you don’t need to give birth to a child to be a wonderful mom.

Room is the only place Jack (Jacob Tremblay) has ever known. He was born there, spent his five years of life there. For Jack, his whole world consists of just him and Ma (Brie Larson) and Room. But in its own, small way, it’s a wonderful world — thanks to Ma. Make no mistake: the R-rated Room can be an extraordinarily difficult movie to watch, but it’s one of the most moving films of the decade and an incredible depiction of motherhood, even in the most desperate of circumstances.

Auggie Pullman (Tremblay again) doesn’t look like other kids. He was born with crushing deformities, and he’s undergone dozens of surgeries to help him look a little more normal, but he’ll never “fit in.” Now he’s heading off to middle school, a place in which “fitting in” is all that matters. “Why do I have to be so ugly?” he asks his mom. But Isabel (Julia Roberts) — whose life revolves around the little boy — tells him he’s not ugly: She shows him the lines and wrinkles on her own face, saying that she remembers where she got them. “This,” she says, pointing to her heart, “this is the map that shows us where we’re going.” Then she gestures to her face. “This is the map that shows us where we’ve been. And it’s never, ever ugly.” Wonder’s not just Auggie’s story, but Isabel’s too — and the love and dedication she unfailingly, if imperfectly, shows her children.

Read more:
10 Photos that perfectly capture the joy of motherhood