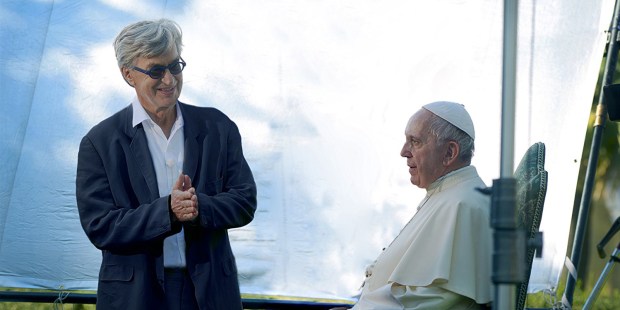 The movie “A Man of his Word” was presented this May 13.

How does one of the greatest contemporary German film directors view the pontificate of the first Latin American pope in history?

This was the subconscious question of the public that packed the theater where Wim Wenders’ film “Pope Francis, A Man of His Word” was shown this May 13, during the 71st International Film Festival of Cannes.

The film, which lasts one hour and 36 minutes and was produced with the collaboration of the Holy See, is not intended to be a biography of Jorge Mario Bergoglio, much less an official exegesis of his pontificate.

“It’s not a move about him; it’s a movie with him,” Wim Wenders explained to Aleteia.org. Wenders has received awards on three separate occasions at the Cannes Festival, most recently for his film “Wings of Desire,” a cinematic classic.

The documentary was possible thanks to Jorge Mario Bergoglio’s willingness to grant four long interviews, during which he answered the director’s questions in front of the cameras.

It would seem that Wenders, with his closeups of the Pope, wants to sit his audience in front of Francis, in a sort of face to face conversation, a private meeting with the pontiff.

The conversation during this meeting centers on the great issues that are key to the common good of humanity: the importance of spirituality, of the family, of work, of a home; the need to reconcile ourselves with our own death, “because we’re not machines”; etc.

The Pope reformulates concerns that he has expressed since he was elected as successor of St. Peter the Apostle: “the globalization of indifference,” the unequal distribution of wealth, and a Christian welcome for immigrants.

In addition, the documentary allows viewers to relive key moments of this pontificate: the encyclical Laudato si, regarding ecological matters; the pope’s speech before the United Nations, in which he asked the leaders of the planet to rigorously examine their own consciences; his trip to the Holy Land; his visit to refugees in Lesbos and to the poor who live in the shantytowns of Rio de Janeiro; and the time when he washed the feet of prisoners in the United States.

Focus Features is deploying a nationwide U.S. distribution strategy for “Pope Francis: A Man of His Word.”

The film’s North American release on May 18 has been set at roughly 300 screens thanks to a marketing strategy that largely relies on outreach to churches and religious groups. The strategy is similar to the one used by Newmarket Film Group in 2004 for Mel Gibson’s “The Passion of the Christ,” which grossed $370 million in the U.S.

Focus is planning to release “Pope Francis: A Man of His Word” in Germany on June 14. Other international markets will follow later in the summer.

While Wenders’ film was still in production, the director explained that Pope Francis is “a living example of a man who keeps his word.” This was his motivation for tackling such a risky enterprise for a film director.

Read more:
Why is Wim Wenders making a movie about Pope Francis?