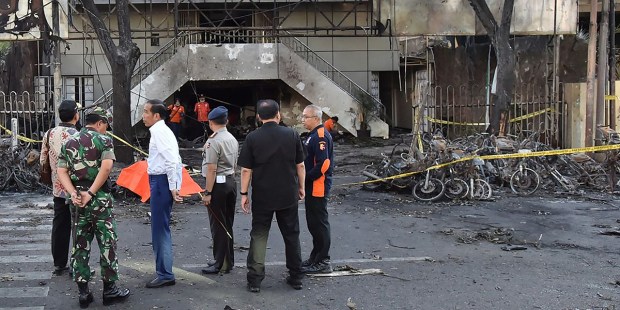 A newly-baptized Catholic blocked two suicide bombers in front of an Indonesian church Sunday morning, losing his own life but preventing the carnage from being much worse.

Within the space of 10 minutes, three suicide bombing attacks on churches in Indonesia left at least seven worshipers dead and at least 43 wounded.

The father drove a bomb-laden car into the grounds of Surabaya Centre Pentecostal Church, police said.

The mother and her two daughters—aged 9 and 12—had bombs strapped to them and blew themselves up at Diponegoro Indonesian Christian Church.

The family’s sons—aged 16 and 18—rode motorcycles into Santa Maria Catholic Church, and detonated explosives they were carrying. It was their attack that came first, at around 07:30 local time (00:30 GMT). The other two attacks followed five minutes apart, police said, according to the Jakarta Post.

One suicide bomber appeared to have been disguised as a churchgoer, the New York Times reported. Another drove a minivan with a bomb to another attack site. And another was seen in footage speeding on a scooter toward a church before an explosion.

Fides news service quoted Fr. Alexius Kurdo Irianto, of Santa Maria parish, also known as the Church of Mary Immaculate, as saying the explosion in front of his church killed three parishioners. Among them was Aloysius Bayu, a newly-baptized man who served as coordinator of the parish security service. Bayu “died because he blocked the two suicide bombers, otherwise the explosion would have caused more victims,” Fr. Irianto explained.

The Islamic State claimed responsibility for the attacks, according to the group’s news agency, Amaq.

Pope Francis assured the “dear people of Indonesia,” and especially Christians in the city of Surabya, that he was “particularly close” to them in the wake of deadly attacks earlier on Sunday.

In his remarks following the weekly Regina Coeli in St. Peter’s Square, Pope Francis said he is praying for the victims and their loved ones, according to Vatican News.

“Together, let us call upon the God of peace, that He might bring these violent actions to an end, and that in the hearts of all, space might be found for feelings, not of hatred and violence, but of reconciliation and fraternity,” the pope said.

On Monday, police said there were at least two other bomb blasts in other parts of Indonesia on Sunday, as well as a trove of completed bombs found in a separate housing complex. In one incident, police were closing in on the apartment of a man they say was a friend of the man behind the church bombings. A bomb went off inside the apartment, killing the man and his wife and one of their children, and injuring another three children.

And in an attack on Monday morning, a team of bombers on two motorcycles detonated explosives at a checkpoint outside the city police headquarters in Surabaya, the Times reported. A police spokesman said that four of the five people on the motorcycles were killed, and that the fifth, an 8-year-old girl, had been taken to the hospital.

The BBC said the church attacks were the first instance of children being used in suicide bombings in Indonesia, though women have been used in the past.

“We vigorously denounce such terror and reject all forms of violence, because they are incompatible with the dignity of human life and are contrary to any religious teaching,” said Fr. Irianto. “Despite our profound sadness, we forgive the perpetrators of crimes and pray for the guilty and organizers of these horrible acts: may the Lord enlighten their minds.

“Today, even if we are suffering and grieving, we are called to give sincere forgiveness: this is the path for a prosperous future of the Indonesian nation,” Fr. Irianto said.