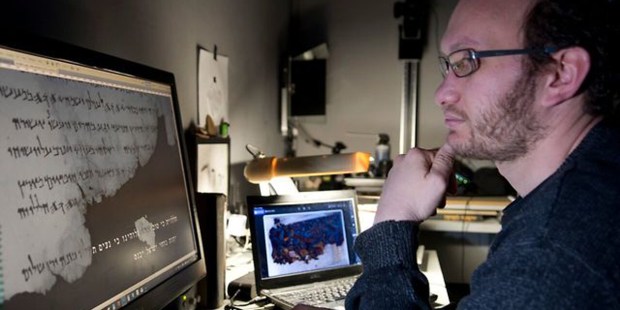 Once nearly invisible fragments now come to light, thanks to imaging.

The Dead Sea Scrolls have fascinated archaeologists and scholars ever since they were discovered 70 years ago. Now scientists are making even more discoveries, thanks to new digital technology.

Some scrolls have contained writing too faint to read with the naked eye. But new imaging technology is helping people like Oren Ableman, a Ph.D. student at the Hebrew University of Jerusalem and a researcher in the Israel Antiquities Authority’s Dead Sea Scrolls Unit, to decipher what they say.

“From the letters Ableman could read after digitizing these Dead Sea Scroll fragments, he reconstructed the texts on the fragments and identified passages from the Books of Deuteronomy, Leviticus, and [the apochrypal] Jubilees,” according to Bible History Daily. An IAA press release cautions, however, that “due to the fragmentary nature of the evidence, these reconstructions are not certain, but are highly likely.”

The IAA is digitally documenting each Dead Sea Scroll fragment. Its press release describes some of the fragments that could provide new information in Dead Sea Scroll research:

• A fragment belonging to the Temple Scroll, a text dealing with directions for conducting the services in the ideal Temple. In current scholarship, there is a debate [as to whether] there are two or three copies of the Temple Scroll found in Cave 11 near Qumran. The identification of the new fragment strengthens the theory that a manuscript given the number 11Q21 is indeed a third copy of this text from Cave 11.

• In addition, a fragment has been identified as belonging to the Great Psalms Scroll (11Q5). The new fragment preserves part of the beginning of Psalm 147:1. The end of the same verse is preserved in a large fragment that was purchased and originally published by Yigal Yadin. The new fragment indicates that the text of Psalm 147:1 in this manuscript was slightly shorter than the Hebrew text commonly used today.

• Another fragment contains letters written in the ancient Hebrew script (paleo-Hebrew). This fragment could not be attributed to any one of the known manuscripts. This raises the possibility that it belonged to a still unknown manuscript.