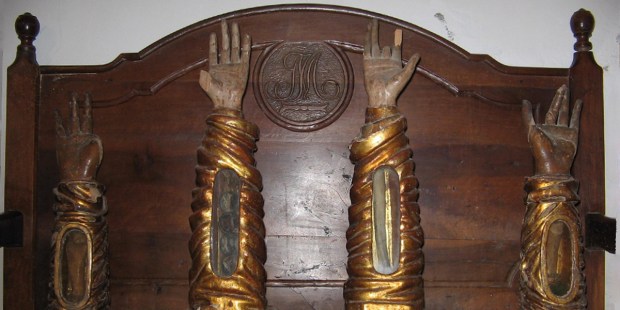 The sacred relics of the great Catholic theologian are scattered all over Europe.

St. Thomas Aquinas was born in 1225 in the county of Aquina, modern-day Latium, Italy. He stands as one of the most highly regarded theologians of the Catholic tradition and one of the most prolific medieval thinkers at large.

His most important body of work, the 3,000-page Summa Theologiae, often simply called “the Summa,” is considered to be one of the “classics of the history of philosophy and one of the most influential works of Western literature.” It is a comprehensive compendium of the main principles of theological thought divided according to three main themes: the existence of God, the purpose of man’s life and the figure of Christ. The saint eventually died before completing his monumental work, but nevertheless the Summa stands as one of the pillar of Western theological thought to this day.

Aquinas’ path was not easy. His noble family originally opposed his decision to join the Dominican Order, which had been founded few years earlier by Saint Dominic of Guzman. His brothers went so far as to kidnap him after hearing of his plans. After more than a year of forced home confinement, Aquinas was eventually set free and became a Dominican. Thomas had studied at the Benedictine monastery of Montecassino as child and was allegedly attracted by the Dominican emphasis on communal life and preaching compared with the “hermit” lifestyle he had experienced at Monte Cassino. From 1245 to 1251, he pursued theological studies first in Italy and then Paris, where he studied under Albertus Magnus, a German Catholic Dominican friar who would later be known as St. Albert the Great. Thomas was known for being an excellent albeit modest student whose intelligence was sometimes underestimated by his fellow classmates. However, after reading his theology thesis, Albert the Great famously stated, “We call this man a dumb ox but his bellowing in doctrine will one day resound throughout the world.”

Aquinas was ordained in Cologne, Germany, in 1250 and started teaching at the University of Paris shortly afterwards. In the 1270s he went back to Italy to found a Dominican school in a monastery near the 13th-century Basilica of San Domenico Maggiore in Naples. According to Domenic of Caserta, who served a the sacristan at the church, Aquinas once levitated in prayer before an icon of Jesus Christ, who complimented his writing. When asked what he wanted in return for his work, he allegedly responded “Nothing but you, Lord.”

In 1274 he hit his head on a tree branch while on a visit at the Cistercian monastery of Fossanova, in Italy. He died on March 7 of that year while giving commentary on the Old Testament. Monks at Fossanova were keen to keep his remains in situ, but after St. Thomas was canonized in 1363, the Dominican order asked Pope Urban V to move the holy bones to the Dominican Church of Toulouse, the “Convent of the Jacobins,” where Dominic founded the order in 1216.

During the French Revolution, the shrine that preserved the saint’s remains was destroyed and his bones were moved to to the Church of St. Sernin in Toulouse. They were eventually transferred back to the Dominican church in 1974 in occasion of the 700th anniversary of Aquinas’ death. But some of his remains are located in other churches around Europe. His head is believed to be preserved in the cathedral of Priverno in Latium, Italy, while a fragment of the bone in his left arm was eventually transferred to San Domenico Maggiore in Naples, where it is still preserved inside an arm-shaped reliquary made of bronze, silver and glass in the church’s Sacred Relics Chamber.