In images: This spectacular ceiling mosaic in St. Louis cathedral is the largest in the world

Meet the Polish immigrant responsible for the 83,000 sq. ft masterpiece.

The Cathedral Basilica of St. Louis, also known as the St. Louis Cathedral, is the site of the world’s largest ceiling mosaic, the work of a Polish immigrant, Jan Henryk de Rosen.

Click “Launch the slideshow” in the image below to view incredible images of the mosaic: 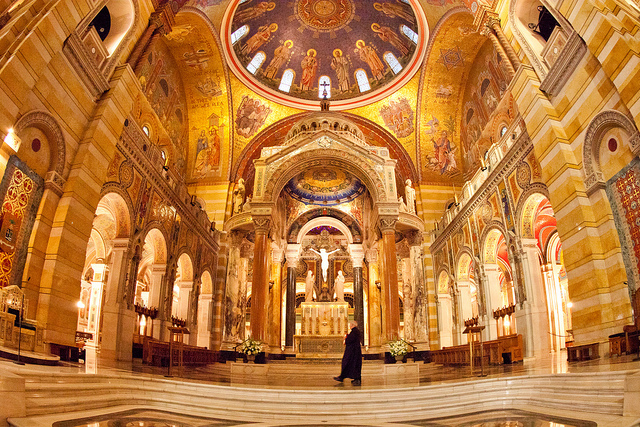 This is the 30th anniversary of the completion of the cathedral’s mosaics, but they were begun in 1912. When you learn about their scope, it’s not difficult to understand why: they cover 83,000 square feet, consisting of 41.5 million glass tesserae pieces in more than 7,000 colors.

The scope of de Rosen’s life is just as all-encompassing. When he was born in 1891, the city of his birth, Warsaw, was part of the Russian Empire. His father, Jan de Rossen, was a court painter for Czar Alexander III and Czar Nicholas II. Both of his parents had come from Jewish families that had converted to Calvinism in the 19th century. Jan Henryk converted to Catholicism later on in life.

Growing up in Paris, Jan Henryk enlisted in the French army in the First World War, but later joined the British army. When a Polish army was constituted, he joined it. When the war ended, and Poland was granted independence, he became a diplomat and served as a translator during peace negotiations at Versailles.

At the age of 33, he began to paint, and his work caught the attention of the Armenian archbishop of Lviv, then in Poland, who commissioned him to paint murals in the Armenian cathedral. Those he completed in 1929.

Later, Pope Pius XI commissioned him to paint four murals in the pope’s private chapel at his summer residence in Castel Gandolfo.

De Rosen came to United States in the late 1930s at the request of the Polish ambassador to paint murals at the Polish embassy in Washington showing King Jan III Sobieski at Vienna. He also produced some decorations for the Polish Pavilion at the World’s Fair.

The outbreak of World War II, followed by German and Soviet occupation of Poland, prompted de Rosen to stay in the United States. He later became a professor of church art at the Catholic University of America. In 1959, at the nearby National Shrine of the Immaculate Conception, he completed what was then the largest mosaic of Christ. It is a traditional Byzantine style “Christ Pantocrator,” or Christ, Ruler of All. But some commentators have suggested slyly that the 3,610-square-foot mosaic’s “mean” look is meant to scare the politicians in Washington.

It may be appropriate, then, that he went on to design the Arch of the Last Judgment in the St. Louis Cathedral, along with the central dome. He was just one of several artists to have worked on the St. Louis mosaics, but his work there is believed to be the largest mosaic in the world, at 14,000 square feet.

When de Rosen died in 1982, he was a member of the Cathedral Parish of St. Thomas More in Arlington, Virginia. Seventeen years later, another Pole, Pope John Paul II, visited the Cathedral of St. Louis and stood beneath de Rosen’s great dome.

“A few months ago, a pilgrimage from St. Louis came to Rome,” the pope said there. “We met on the steps of St. Peter’s, where they sang to me: ‘Meet me in St. Louis. . . meet me at the Dome!’ With God’s help, we have done it. I will always remember St. Louis. I will remember all of you.”