Do you know what the Jews celebrated on Pentecost? 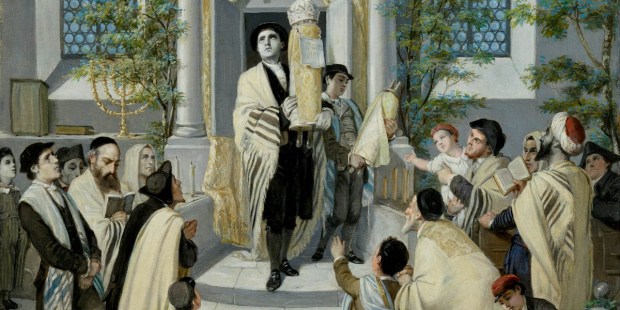 Now our feast of the coming of the Holy Spirit, this day was long celebrated by Jesus’ people.

Pentecost is a central feast of Judaism. Known as the Feast of Weeks, or Shavuot in Hebrew, it is, together with Pesach and Sukkot, one the three pilgrimage feasts of Israel during which each adult male was required to be present in Jerusalem (cf. Ex 23:14-17).

In Christ, the celebration of these feasts, as with the whole of the Law, is recapitulated. “Think not that I have come to abolish the law and the prophets; I have come not to abolish them but to fulfill them” (Mt 5:17).

Pesach (or Passover), recalls the sacrifice of the lamb whose blood, daubed on the doorposts of the Hebrews, delivered them from the 10th plague when, as the firstborn of the Egyptians were taken, God’s “first-born son” (Ex 4:22) was delivered from the death of slavery and began the wilderness wandering toward Sinai. In the Passion, “Christ, our Passover lamb has been sacrificed” (1 Cor 5:7), and by the blood of that sacrifice those who belong to Christ are, in a way that sums up and exceeds Israel’s deliverance, drawn out of death and into the newness of life. Jesus is “the lamb of God who takes away the sin of the world” (Jn 1:29) and who, by his resurrection “makes all things new” (Rev 21:5). The Passover sacrifice becomes the sacrifice of the Mass.

Sukkot, known otherwise as the Feast of Booths or Tabernacles, is named for the tents in which Israel dwelt during the years in the wilderness. The feast also recalls also the Tent of Meeting (Ex 25:8ff.), in which God was present to his people and the richness of the Promised Land toward which they journeyed. In Christ, God “has pitched his tent among us” (Jn 1:14) and has become the “pioneer of our faith” (Heb 2:10; 12:2) as he accompanies the pilgrim people of God in their journey toward the promised land of heaven. The feast of Sukkot is, then, recapitulated in every remembrance of the Incarnation—be it the feast of the Annunciation, the Nativity, or even a prayer such as the Angelus.

Shavuot, or Pentecost, celebrates the giving of the Law at Sinai. In Hebrew, the feast is sometimes called Atzeret Pesach, or “the gathering of Passover,” for it marks the conclusion—at least a proximate one—of what begins in the Exodus. In the first creation account of Genesis, we see the progression from the chaotic waters “in the beginning” (Gen 1:1-2) to the completion of creation on the sixth day, a whole that is “very good” and over which mankind is given the task of exercising dominion so as to lead creation into the Sabbath rest.

The Exodus narrates much the same. It likewise is a creation account, the making, as Dorothy Day liked to say, of “new society within the shell of the old” (cf. Industrial Union Manifesto).

As Terence Fretheim observes, “At this small, lonely place in the midst of the chaos of the wilderness a new creation comes into being. In the midst of disorder, there is order. The tabernacle,” in which Israel’s keeping or the Law comes to a head, “is the world order as God intended writ small in Israel.”

In this way, Shavuot is akin to the sixth day. It sees the creation of the people Israel and the assignment of a task, namely, the keeping of the Law, which promises to lead Israel (and the whole of creation with her) into God’s rest (Ps 95:11; Heb 4:11).

The whole of this is recapitulated on the day of Pentecost among those gathered not on Sinai but in the Upper Room (Acts 2:1ff.). We see then the giving of a new Law, the Holy Spirit, written “not on tablets of stone but on tablets of human hearts” (2 Cor 3:3; cf. Jer 31:33).

It is creation of a new people, the Church, who herself takes up the mantle given to Israel to be a blessing unto others by leading them into God’s rest.

As St. Peter writes, alluding the words of the Lord at that first Pentecost in the wilderness, “you are a chosen race, a royal priesthood, a holy nation, God’s own people, ” (1 Pet 2:9; cf. Ex 19:5-6). By the gift of the Spirit, the Church incorporates not only God’s “first-born,” but the whole of humanity, first Jew, then Gentile (Rom 1:16). By the gift of the Spirit, the chaos and division of Babel (Gen 11:1-9) are undone when the disciples “began to speak in other tongues … and each one heard them in his own language” (Acts 2:4, 6). By the gift of the Spirit, the whole is begun again to be knit together, to become “very good” (Gen 1:31), and by the offering of “spiritual sacrifices acceptable to God through Jesus Christ” (1 Pet 2:4; Rom 12:1) to continue in that journey to enter into God’s rest.

Read more:
Quiz: What are the 12 fruits of the Holy Spirit?