A soldier couldn’t be there when his wife went into labor, so he did the next best thing … 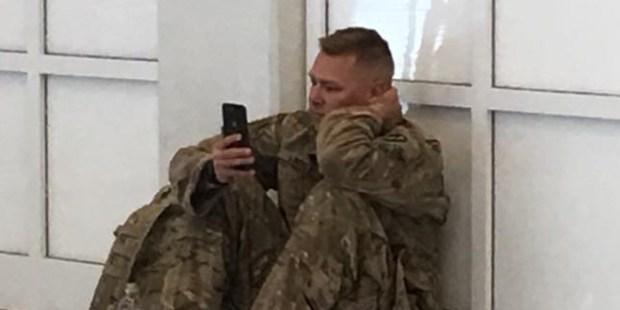 This is a reminder of what our soldiers sacrifice for us, every day.

Brooks Lindsey was on his way home to see his pregnant wife when his flight was delayed. While he was stuck in the airport, his wife went into labor, so the U.S. soldier decided to be with her the only way he could: He FaceTimed her.

His wife, Haley Brooks, gave birth to their daughter, Millie, while he watched on his phone, eventually bursting into tears.

Tracy Dover, another traveler in the same airport, posted the story on Facebook, saying, “When we heard the baby cry, we all rejoiced for him. I wanted to share this because I never want us to forget about our soldiers who serve us everyday and the sacrifices they make.”

The onlookers had a temporary window into these sacrifices that our soldiers make for us every day. Lindsey couldn’t be there in person, but, thanks to the miracles of technology, he could still take part.

Read more:
7 Ways dads can help their wives once the baby arrives