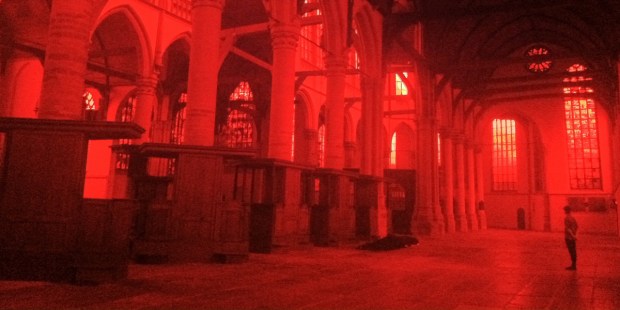 The artist set out to “bring the Roman Catholic visual idiom back into the building.”

Last year Pope Francis was sharing the message of ecumenism with the Lutherans of Sweden as they celebrated the 500th anniversary of Martin Luther’s 95 Theses. This year the bridge building continues with the Dutch Reformed Church.

Built in 1306, the Oude Kerk is Amsterdam’s oldest building and youngest museum. It was also once a symbol of Calvinist supremacy after Amsterdam’s Protestants took control of the city’s government and churches, renaming the former Catholic Church of St. Nicholas as the Old Church. It is now the setting for an art installation that according to the church’s website “brings the Roman Catholic visual idiom back into the building.” The fiery color is a reminder of the fury and destruction of the Beeldenstorm (“storm of images”) that preceded the “Alteration” of 1578.

Italian artist Giorgio Andreotta Calò is committed to reminding visitors about the period of iconoclasm that took place in the Oude Kerk between 1566 and 1578. He has performed this feat by placing filters on the windows, covering a surface of more than 1,600 square meters. All the light that comes into the church is now red during the daytime. At night, when there is more light on the inside, it appears to glow red to those wandering the streets of central Amsterdam. Red lights are an essential part of the prostitution that brings so many tourists to this quarter of the city. However, local opposition to human trafficking and the abuse of women has recently caused this to become a sunset industry in every sense.

The Oude Kerk installation is not just a reminder of Amsterdam’s past and present. It is also a very visual reconciliation with the Catholic community, which in pre-Reformation times basked in warm hues at the church. With the new Protestant identity, the ambience was cooled down with tiles in blue and green.

The Dutch Protestants fought hard to win their Reformation, which took place in Amsterdam in 1578, making this year the 440th anniversary. Three decades later, the new faith was exploring the terrain for a colony that was to become New Amsterdam; New York was the name given when the British took it from the Dutch.

With new management at the Oude Kerk 440 years ago, there were considerable interior-design changes to the largest church in the Dutch Republic. Over the centuries it has become more of a gallery than a place of worship. It is still used for Dutch Reformed services, but with the secular modern mood of the Netherlands there is lots of room for well-reasoned dialogue, including themes such as “Oude Kerk — Catholic of Protestant?” All this in a country that according to a United Nations’ survey has more atheists than believers in God.

There is also plenty of room for temporary artistic expression at the Oude Kerk. It has changed little since Rembrandt christened his children there, but Amsterdam’s greatest painter wouldn’t recognise his local church for the next few months. Calò’s work is titled “Anastasis,” from the ancient Greek word for “Resurrection” as well as “sunrise” and ‘revival.” The exhibition is very much about the sun and reviving lost images. Iconoclasm in the past means that the Oude Kerk is perfect for this revival. The Chapel of the Holy Sepulchre is modeled on the church with the same name in Jerusalem. Before 1566 it housed statues representing the Lamentation of Christ. For Calò, this is an opportunity to fill in the gaps: “In the work Anastasis I draw a connection with the visibility of absent images.”

“It was immediately clear to me, during my first visit, that the Oude Kerk is a place that already works by itself,” continues Calò. “What the church needed was an extra layer to change the public’s perception of the space.”

The time of year is also of great importance to the artist. With the longest day approaching, he wants to emphasise the moment at which light is at its most intense.

“It’s a period that begins with Easter, and in that sense alludes to the Christian calendar; nature is changing and the days are getting longer. Sunlight is the protagonist of this exhibition and turns the monumental Oude Kerk into a place for experience and reflection.”

Making further use of the distinctive, new, red light in the church, Calò is creating a monumental darkroom. He will make impressions of the three “Mary windows” on photographic paper. The red light will preserve the image and protect it from overexposure. The preparation and selection of the images takes place in the work space in the Lady Chapel. Later, they will be developed in the laboratory of the Rijksakademie van beeldende kunsten. Enthusiasts of old-style darkroom technology will be impressed by the novel application.

In addition to bringing different religious communities together, Anastasis is about learning lessons from history. As a Venetian, the artist is conscious of both history and the interaction of cultures. La Serenissima was always the gateway between East and West. The message of the exhibition is about cultural loss all over the world, including the artist’s grief over Palmyra and Bamiyan. In Amsterdam it seems that there is not just the will to make up for some of the losses, but also the practical ingenuity.

See the Oude Kerk in a new light until September 23.