Christians in Myanmar suffering from similar treatment received by Rohingya 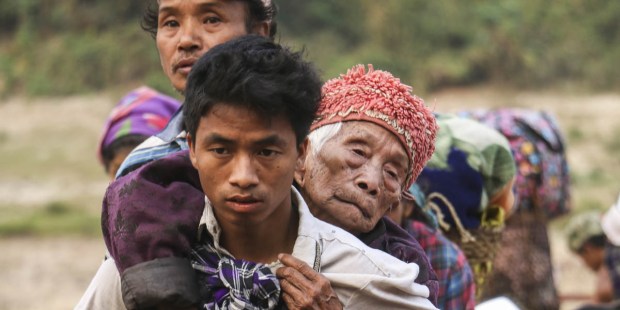 The United Nations and the government of Myanmar have signed a pact that aims to start the process of repatriating some of the hundreds of thousands of Rohingya Muslims who fled a brutal crackdown by the army last year, National Public Radio reported.

But while there seems to be a let up in the persecution of the Muslim minority, there are reports that Myanmar, otherwise known as Burma, is harshly treating its Christian minority population.

Kachin rebels in Myanmar, who are mostly Christian and live in the northern mountainous area of the country, say one in eight of their population has been displaced, according to Sky News.

Sky correspondent Alex Crawford said he found “worrying evidence of a second genocidal campaign” in Myanmar, and he suggested that the Burmese authorities may have been emboldened by the lack of a strong international response to the first genocidal campaign, against the Rohingya.

The Kachin, who live in an area bordered by China and India, have been fighting for self-determination since Burma gained independence from the British Commonwealth in 1948. “Over the decades they have formed an effective army, known as the the Kachin Independent Army (KIA), and an administrative body called the Kachin Independence Organisation (KIO),” Crawford writes.

Thousands have died in bombings and attacks against them carried out by the Myanmar military — and these attacks have increased substantially since January after the same forces had spent months driving the Rohingya out from the west of the country.

The national forces have been using helicopters and heavy artillery to bomb Kachin rebel positions.

Thousands of civilians have been stranded in the thick jungle and fled several times to escape the attacks.

A number of civilians Crawford spoke to told of attacks on or near civilians who had taken shelter in the camps for displaced people dotted across the region.

“Unfortunately, this is not a new story,” said Daniel Mark, chairman of the United States Commission on International Religious Freedom (USCIRF), “though perhaps the military has stepped up the intensity.”

The report said that the Ministry of Religious Affairs and Culture, the military-run Ministries of Border Affairs and Home Affairs, and the military itself are directly responsible for religious freedom violations:

The military routinely occupies churches and summons entire congregations for interrogation. Tatmadaw (Burmese Army) troops have desecrated, damaged, and destroyed churches. The military continues to perpetrate grave human rights violations with near total impunity, including sexual violence in church compounds and the torture of pastors, church workers, and ordinary civilians. To date, approximately 120,000 people have been forced to flee.

Over 60 Christian churches have been destroyed in Kachin State since a long-standing ceasefire broke down in 2011, according to British advocacy group Christian Solidarity Worldwide. Bishop Francis Daw Tang of the Diocese of Myitkyina in the state of Kachin told Fides news agency that 7,000 Christians belonging to the Kachin ethnic minority have been forced to abandon their homes due to the escalation of violence between the Burmese army and the Kachin rebels.

“In early April, the Burmese army began to attack the region on the border with China,” Bishop Tang told Fides in mid-May. “Many villages were attacked and the population started to flee. Many have been trapped in the jungle for at least three weeks, without food and without freedom to move, because they are suspected of being rebel collaborators.”

In a “Letter to the Population” released May 24, religious leaders gathered for the forum “Religions for Peace,” led by Cardinal Charles Maung Bo, took note of “the growing hostility and large displacement of people in the Kachin and Shan states, which further weaken the peace and reconciliation process.”