EXCLUSIVE PHOTOS: Bringing Christ to the streets of New York

A story of hope from Little Italy

New York is a city of hope, a city of dreams. And its promise is the same today as it was in 1664 when its name — a name that evokes a nod of respect in even the most remote corners of the world — was bestowed on it.

In a way, it’s the one place on the planet that every nation on earth can lay some claim to. It was built by the blood, sweat and dreams of immigrants from every country and continent, all of whom came for the promise of a chance at building a life as grand as the city’s sky-piercing towers and palatial avenues.

In the late 1800s, Ellis Island was the entrance to this city of dreams. One can only imagine the looks on those tired, sea-worn faces; the tears in the eyes gazing for the first time on the glimmering torch of the Lady, who stood beckoning at the threshold of this promise of a better life.

As the first waves of Italian immigrants began arriving in the late 1800s construction began on a church that today is known as the Shrine Church of the Most Precious Blood. It’s located in the heart of Little Italy on Manhattan’s Lower East Side, bordering the infamous Bowery. It was a church built in the midst of perhaps the poorest Italian community in the city, rife with overcrowded tenements and insufferable living conditions — yet a community baptizing thousands of babies each year and celebrating dozens of weddings each weekend; an oasis of grace in a desert of poverty.

One hundred years later the vibrant parish church remains, still proudly rooted in its rich Italian heritage, but now welcoming today’s immigrants: the Latino, the Vietnamese, and the Chinese, with the same warm embrace it offered over a century ago.

On June 9, 2018, in the church’s small sacristy, a priest gently placed the Blessed Sacrament in a monstrance to be carried in procession, before what were once derelict tenement apartments packed with those seeking a better life, and before the men and women whose immigrant ancestors earned them the life they struggled to provide. 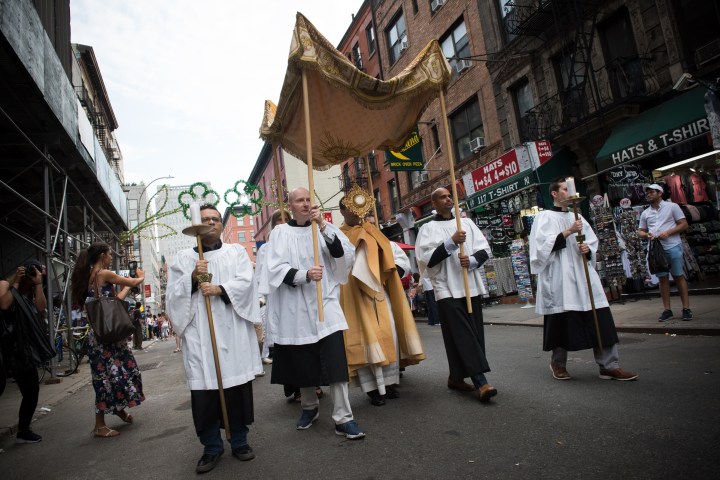 As the procession spilled on to the crowded city street, the music of clinking glasses and gleeful conversation emanating from the many sidewalk bistros and cafés filled the air. But as voices were raised in sacred hymn a quiet stillness fell. And with every advancing step the mood on the street changed to one of hushed tones, curiosity and an instinctual reverence.

People raised their inquiring eyes to witness the unexpected. Cell phones and cameras appeared as if a celebrity had surfaced, while members of the Frassati Fellowship reached out to onlookers with a warm invitation to prayer and Adoration. It was a scene that echoed back some 2,000 years to the dusty byways of Jerusalem, where Jesus and His disciples delivered the same message while making their way…

The story of New York was written by the hearts of millions, all seeking a better life; to find lives of meaning and acceptance, to be free, to know love.

It’s a passionate story of every soul’s longing.

But the story of New York is written with concrete and steel and could never satisfy what the soul truly seeks. However, as the sun set on the city that cool spring evening, and the procession wound its way up Mulberry Street bearing the very Presence of Christ, New York could make good on its offer …

“Come to me, all you who labor and are burdened, and I will give you rest. Take my yoke upon you and learn from me, for I am meek and humble of heart; and you will find rest for yourselves. For my yoke is easy, and my burden light.”