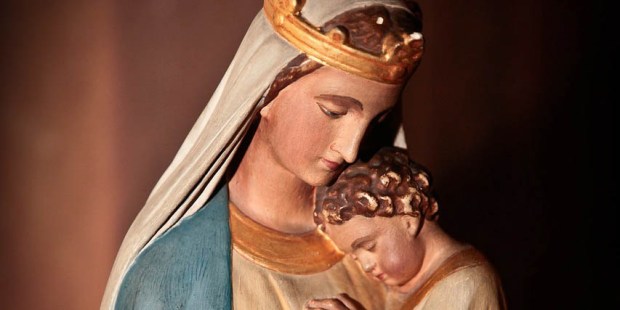 If we truly believed that Mary was the Mother of God we would tread lightly before her. Or would we?

It was the Feast of Our Lady of Guadalupe, and my niece Elizabeth had just turned 4. That morning, none of her siblings had been ready to go when I walked out the door to Mass, so Elizabeth got to go on a very special Mass date with me. She got to ride in my car and pick our pew and be the center of attention—a very exciting morning for a little girl with a twin sister.

A few minutes into Mass, she looked over to the side of the altar, where a statue of the Blessed Mother usually stands, and squealed. “Aunt Meg!” she stage-whispered, “they put Our Lady of Guadalupe there instead of the statue of plain old regular Mary!” She was thrilled to see Our Lady of Guadalupe there, but I was struck by the language she used. “Plain old regular Mary,” she said.

The statue she spoke of is no plain statue of a young Palestinian girl looking simple and demure; this is a marble image of Mary wearing an elaborate crown. She’s holding her similarly-crowned divine Son as he stands atop an image of the world.

Something about that preschool title for Mary struck me. We look upon a woman clothed with the sun, with a crown of stars around her head, holding the God-man close to her heart as she crushes the head of Satan, and find it ordinary. Plain Old Regular Mary.

There are poetic images of Mary, like Star of the Sea, or images from Marian apparitions in Europe and Africa and Asia. There are icons written to affirm Christological doctrines and icons through which God worked miracles. There are stunning paintings and glow-in-the-dark statues, theologically rich titles and humble devotions.

But at the root of it all is Plain Old Regular Mary, a woman so loving and homey that she seems ordinary. The mother of a God so close to us that we forget to be filled with awe before him. We might be inclined to be dismayed when we find ourselves taking such things for granted, concerned that if we truly believed that Mary was the Mother of God we would tread lightly before her. But before she’s a queen, she’s a mother.

If I may be forgiven for putting words in the mouth of the Mother of God, I think that’s exactly how she would want it. She would a thousand times rather be the mother we share our lives with, the queen whose crown just looks like jewelry to her children when they run to her with scraped knees and broken hearts, than the ornamented figure on a pedestal. We who are blessed to know her as mother might find ourselves forgetting that this is the woman before whom the angels bow — but better to be sure of her love and forgetful of her dignity than the other way around.

When we take for granted that Mary is the Theotokos, the God-bearer, it may be because we believe so fully in the incarnation that we’ve forgotten that it ought to amaze us. And while wonder and awe are beautiful gifts, so is the gift of familiarity. Perhaps we find ourselves unimpressed by Mary because her love is a given in our lives. That intimacy speaks more about her role as mother of God and our mother than any feigned honor ever could.

For Elizabeth, Our Lady of Guadalupe was exciting because she was new. But Plain Old Regular Mary is her mom, crown and all. For others, Guadalupe or Czestochowa or Lourdes might be the image that makes them feel like they’ve come home. Whether your Plain Old Regular Mary is holding a basket of laundry or the dead body of her crucified Son, dressed in gold brocade or rough homespun, crowned with stars or sleeping beside the road to Egypt, may she be such a fixture in your life that you take her for granted. May her love surround you so fully that you often forget it’s there. May you rest in her love as she leads you to her Son.

Read more:
Catholicism: “Here comes everybody,” even the annoying ones