What it’s like to live in the Vatican: The wife of a Swiss Guard tells us 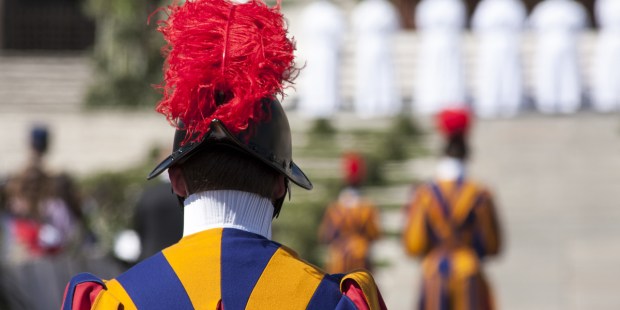 Magdalena Wolińska-Riedi is a well-known journalist from Poland covering the Vatican.

Her extraordinary life story, linked to the Eternal City, began in the year 2000, during World Youth Day with John Paul II. As a WYD volunteer, walking through St. Peter’s Square, Magda asked one of the Swiss Guard for directions. Little did she know she was talking to her future husband …

We asked her to tell us about her life.

Iwona Flisikowska: You live in a place with an extraordinary air, behind the walls of the Vatican. Is it really a different world?

Magdalena Wolinska-Riedi: Yes, everyday life behind the Bronze Door is a completely different world. I think we can safely compare it to a royal court, for example. The Vatican is an enclave separated from the Eternal City by a high wall; its gates locked every evening and reopened at 6 a.m. The whole country gets locked down, literally.

I am one of about 400 people living here, including only 30 lay women. On the one hand, I feel every day that I am in an exceptional place and this is an extraordinary feeling. We feel the care and respect that men have for us, especially when you consider that 110 of the small number of inhabitants are soldiers. In addition, there are 150 police agents, or Vatican gendarmes, who do not live in the Vatican, but are on duty 24 hours a day to keep everyone safe.

Life in the Vatican is under permanent scrutiny. Interestingly, over 300 cameras are located in different nooks and crannies of this smallest country of the world. All of this is meant to assure Pope Francis’ safety and security as well as the security of all of us who live in the immediate “neighborhood.”

The greatest privilege of living behind the Vatican walls is the permanent presence of Pope Francis and Pope Emeritus Benedict. We see each other when Francis drives by in a car for meetings and audiences at the Apostolic Palace and when he is coming back from his journeys. Strolling in the Vatican Gardens, my daughters and I can come across Pope Benedict (unfortunately, less and less often now due to the fact that with age, his physical strength is gradually waning).

I feel at home in the Vatican. It is one big family. I have lived here for 15 years and I know every single stone. This is certainly my place on earth. Unique to millions of Catholics and people around the world, it is at the same time the most special place for me and for my loved ones.

What is your daily life in the Vatican like?

Every day I remember that the Vatican is not only a microscopic country, where I buy my groceries, go with my children to periodic check-ups with a pediatrician or ride a bike in my free time, but it is also the heart of our faith, the place where the leaders of the Church live. That is why it is natural for me to follow the rules that apply, e.g. to the faithful attending Holy Mass.

We cannot walk on the streets of the Vatican with bare shoulders, in short skirts or in shorts, even if summer in Rome is unbearable and the temperature exceeds 40 degrees (104 F) in the shade. We cannot be too loud late in the evening or throw big parties where guests dance and sing until the wee hours. We are at home, but at the same time we are within ancient walls, in the shadow of the Apostolic Palace, near the House of St. Martha, where Pope Francis lives. That is why you have to be modest and calm down after dark. The world freezes here; the pulsating life of the Eternal City reaches us from outside, but it remains in a different dimension.

The life of us lay men and women is quite normal. Though, it keeps to the rhythm of the liturgical calendar and of the national calendar of the Vatican. Quite naturally, e.g. Pentecost is a holiday here, as well as the memorial of the pope’s patron saint and the anniversary of the Holy Father’s election to the pontificate. On those days all shops and offices are closed.

In our small family of Swiss Guards, we also celebrate numerous holidays and traditions related to the Guard itself, such as the anniversary of the founding of the smallest and oldest military formation in the world or, for example, Santa Claus, and August 1, the anniversary of the establishment of the Swiss Confederation. On such occasions we all meet in a beautiful courtyard, where the guards normally practice their drill on a daily basis. We sit at long tables, in the shadow of medieval bastions, and after official speeches we feast until late. Of course, always in moderation!

Journalism has become your extraordinary job and passion. In retrospect, is it a kind of “special mission”?

I have never believed in coincidences, and my career path in journalism was definitely not a matter of chance, either. I always entrust to God’s Providence the key matters of my life. I did the same in this case.

Unexpectedly, I answered a phone call and received a proposal. It was a great challenge. I must admit that I am an ambitious person: I have three university diplomas and know several languages, so I thought the challenge was well worth it, if only to test myself. I also regarded this work as a special mission, where I could combine my experience of television production with my life in the Vatican, where everything is seen from a different perspective.

I have always wanted to bring the pope, the Church and the Vatican closer to the audience, to my compatriots, but it has never ceased to fascinate me to be able to spotlight other issues, too. …

The key challenges included a wave of migration that has calmed down today, but for two years this was the topic that was of most concern to Italy and the Mediterranean. I visited Lampedusa several times and went to the open sea with an Italian police patrol. We helped illegal migrants to come ashore several dozen nautical miles off the coast of Libya. These were dramatic scenes.

I closely followed the tragedy of Syrian refugees in the camps in Lebanon and Jordan. I reported the drama of the earthquakes in central Italy in 2016 and in the mountains of Abruzzo, where an avalanche claimed the lives of 29 hotel guests. …

The coverage of papal journeys is an extremely important area of my work. I am often quite fortunate to be on the same plane with Pope Francis. And we all feel that we are one community: a group of Vaticanistas and the whole papal entourage that accompanies him — cardinals, bishops and the pope’s bodyguards. A total of about 140 people. I traveled like that to Mexico, Egypt and Krakow.

This last will remain one of the biggest experiences in my journalistic work. As a Polish correspondent with the pope, I flew to my homeland for World Youth Day, which I covered from the most unique places. And I was close to Pope Francis.

In addition, I had the privilege of conducting an evening vigil with Francis on the Fields of Mercy with 2 million young people and 200 million people worldwide, participating in the vigil through the communications media. It was a very special vigil, which will forever remain in my heart and memory.

Does this give you a sense of fulfillment?

Such extraordinary experiences give me great satisfaction and make me feel fulfilled professionally. But surely, like every woman, I am happiest because of my two daughters: 8-year-old Mary and 10-year-old Melania. They give me a real sense of fulfilment. As a mom, I am a fulfilled person. On a daily basis, the girls go to the Swiss school together with a bunch of other children from the Pontifical Swiss Guard.

For my daughters, who were born here, life in the Vatican is something pretty natural: they ride roller skates or bicycles, meet the pope during a walk as well as take part in solemn celebrations. I think it is an excellent school of life that guarantees profound intellectual and spiritual formation. It strengthens our moral character, which seems to me to be extremely important in today’s world.

We also have close and sincere contact with Pope Benedict XVI. To this day we still visit Papa Benedetto in his place of residence, in the Vatican Gardens. It was he, as Cardinal Joseph Ratzinger, who blessed our marriage 15 years ago and it was he also who baptized our two daughters. Neither my husband nor I thought at that time that our marriage was being blessed by a future pope. The close ties have remained for years and I treat this sequence of extraordinary events in my life as a great sign of Providence.

I trust that it is going to stay like that.