Pope’s “ecumenical pilgrimage” to Geneva will have 2 surprising facets 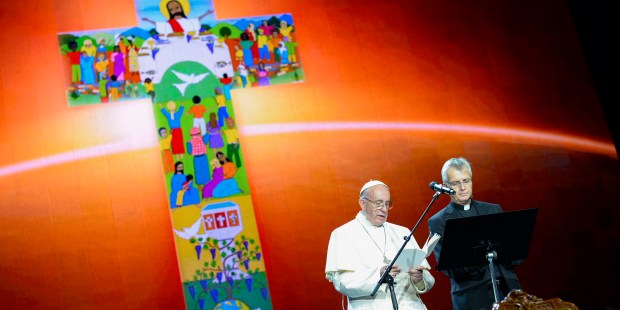 Both have to do with the history of the World Council of Churches and ecumenism in general.

Pope Francis will make a quick day trip to Geneva on June 21 that is being billed by the Vatican as an “ecumenical pilgrimage,” meant to celebrate 70 years of formal cooperation between Christian churches.

Even though the Catholic Church is not a member of the World Council of Churches, the pope’s visit to its Geneva headquarters on the final day of its biennial general assembly is being seen as a booster for ongoing ecumenical cooperation. It is also expected to put the plight of migrants and refugees front and center once again.

In the tense years building up to the outbreak of the Second World War, leaders from about a hundred different Christian churches decided the time was ripe to establish a sort of “League of Nations” of churches. When the World Council of Churches was finally formally established after the war, it focused on encouraging members’ work on behalf of migrants and refugees and collaborating on peacebuilding efforts.

Dr. Olav Fyske Tveit, secretary-general of the WCC, told the Italian news agency Agenzia Sir “despite some lights and shadows” he sees signs of a “new springtime” for ecumenical relations in new initiatives based on mutual cooperation between churches.

He said the pope’s visit coincides with this “ecumenical springtime” and a period in which Christian churches are speaking out forcefully on behalf of migrants and refugees. A meeting in early June of the joint committee made up of the WCC and the Holy See focused on how the two could cooperate when it comes to protecting migrants and refugees.

The focus on migration at that meeting was played out iconically days later as a charity-run ship called Aquarius, carrying 629 migrants rescued from dinghies in the Mediterranean, was barred from docking in Italy by the country’s new Interior Minister, Matteo Salvini. After Malta also refused to allow the ship to dock in its ports, the Aquarius was offered safe harbor in Valencia, Spain, where it docked June 17.

The Rome-based Sant’Egidio Community, a Catholic lay organization known for its work in helping resettle refugees in Europe, denounced the ship’s rejection along with other Catholic aid organizations.

Meanwhile, in the United States, Christian leaders of various denominations have spoke out against the Trump administration’s zero tolerance policies towards migrants at the U.S.-Mexico border, leading to the separation of children from their parents.

Dr. Fyske Tveit also told Agenzia Sir the WCC and the Vatican are planning a joint conference on populism and xenophobia to be held at the Vatican in September 2018.

But the pope’s visit to the WCC headquarters has also been referred to as part of the bigger picture of “how to do” ecumenical relations.

In 2016 Pope Francis visited Lund, Sweden, to mark the 500th anniversary of the Reformation. The reformation had not generally been considered something for Catholics to commemorate. But Dr. Martin Robra, an Evangelical pastor and co-secretary of a joint WWC-Holy See working group, told the Jesuit journal Civilta Cattolica the pope’s speeches during that visit were focused on the future rather than the past and served as a model of how to turn past areas of division into future areas of dialogue and collaboration.

Peacebuilding is also expected to be a key theme of Pope Francis’ visit to Geneva. During his day trip he will visit the Ecumenical Institute of Bossey, which was established in 1946 as a place for lay and clergy of Christian denominations to immerse themselves in studying the things that could unite all Christian churches. Today the institute offers master and doctoral programs in Ecumenical Studies.

Here is the full schedule of the pope’s visit to Geneva:

– Just after 10:00 a.m. local time Pope Francis will arrive in Geneva and have a brief, private meeting with the President of the Swiss Confederation, Alain Berset, before continuing on to the WCC headquarters.

– At 11:15 the pope will give a homily during an ecumenical prayer service at the WCC headquarters

– The pope will have lunch with the WCC leadership

– At 3:45 p.m. Pope Francis will give a more formal talk during an Ecumenical Meeting

– At 5:30 p.m. the pope will celebrate Mass at Geneva’s Palaexpo. The last time a pope celebrated a Mass in Switzerland was 2004. That Mass, celebrated by St. John Paul II in Berne, drew 70,000 people. Organizers in Geneva say the venue chosen for this Mass can hold more than that number of people

– By 7:45 p.m. the pope will be back at Geneva’s airport saying his farewells to his hosts and to local Catholic officials.