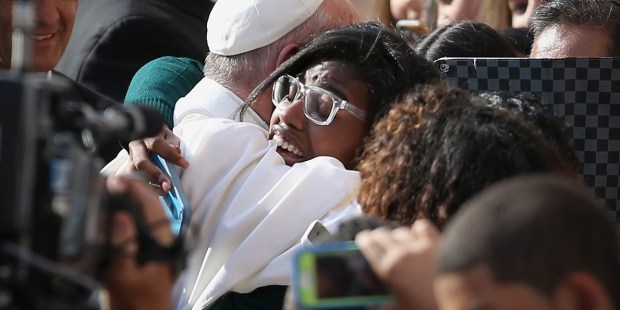 A threat to comfort? Potential for enrichment? Numbers? People? How we look at the topic affects our perspectives.

Pope Francis says that the migration issue needs a change of mindset — to go from seeing migrants as a “threat to our comfort” to realizing that they are people with experiences and values that can “contribute greatly to the enrichment of our society.”

The pope said this in a message read today at the 2nd Conference on International Migration hosted by the Holy See and Mexico. The conference marks the 25th anniversary of the re-establishment of diplomatic relations between the two states.

A change of mindset is needed to ground migrant issues in three values: justice, solidarity and compassion, the Holy Father said.

Specifically, “We must move from considering others as threats to our comfort to valuing them as persons whose life experience and values can contribute greatly to the enrichment of our society. For this to happen, our basic approach must be ‘to encounter the other, to welcome, to know, and to acknowledge him or her.'”

The Bishop of Rome exhorted the entire international community to respond to the issue, acknowledging that the “capacities and resources of many States” are exceeded by the demands of the current situation.

The pope also reiterated what has been his main point in regard to the migration question: “The issue of migration is not simply one of numbers, but of persons, each with his or her own history, culture, feelings and aspirations…”

He continued, “These persons, our brothers and sisters, need ‘ongoing protection,’ independently of whatever migrant status they may have. … Particular concern must be shown for migrant children and their families, those who are victims of human trafficking rings, and those displaced due to conflicts, natural disasters, and persecution.”

He said that these voiceless people need our voices to defend them: “All of them hope that we will have the courage to tear down the wall of ‘comfortable and silent complicity’ that worsens their helplessness; they are waiting for us to show them concern, compassion, and devotion.”

For his part, Cardinal Pietro Parolin, the pope’s secretary of state highlighted the root problems of the migration issue, speaking of migrants’ right to stay in their own countries.

The Holy See does not seek to “interfere” in states’ decisions, but to remind us of the “brotherhood of humanity and principles,” he said, the first of which is the right of everyone to “stay in his own country.” This right should be defended by the international community “above all,” particularly by opposing war, arms trafficking and the “terrible plague” of corruption.

Meanwhile in the United States, the bishops have again raised their voices in response to the latest legislative and administrative decisions.

There is growing attention on the policy of separating children from their parents when they cross the US-Mexico border, so that parents can face prosecution.

With the administration’s “zero tolerance” enforcement, the policy, though not new, is now bringing a larger number of separations.

Additionally, rules on asylum have now been defined such that victims of domestic and gang violence are not eligible for protection.

The full body of US bishops, through the president, Houston’s Cardinal Daniel DiNardo, released a statement in response to these issues.

At its core, asylum is an instrument to preserve the right to life. The Attorney General’s recent decision elicits deep concern because it potentially strips asylum from many women who lack adequate protection. These vulnerable women will now face return to the extreme dangers of domestic violence in their home country. This decision negates decades of precedents that have provided protection to women fleeing domestic violence. …

Additionally, I join Bishop Joe Vásquez, Chairman of USCCB’s Committee on Migration, in condemning the continued use of family separation at the U.S./Mexico border as an implementation of the Administration’s zero tolerance policy. Our government has the discretion in our laws to ensure that young children are not separated from their parents and exposed to irreparable harm and trauma. Families are the foundational element of our society and they must be able to stay together. While protecting our borders is important, we can and must do better as a government, and as a society, to find other ways to ensure that safety. Separating babies from their mothers is not the answer and is immoral.

But the House of Representatives is now set to debate two immigration bills next week. This comes after a nearly-successful move by some Republicans to force debate on four immigration bills.

According to Archbishop Jose Gomez of Los Angeles, regarding the issue at the fore of this debate, the Dreamers (those who were brought as children to the United States), “We are closer to a bipartisan compromise than we have been in many years. It is time for Congress to finish this work.”

Read more:
Migrants aren’t a threat, says the director of the “Casa del Migrante” in Tijuana