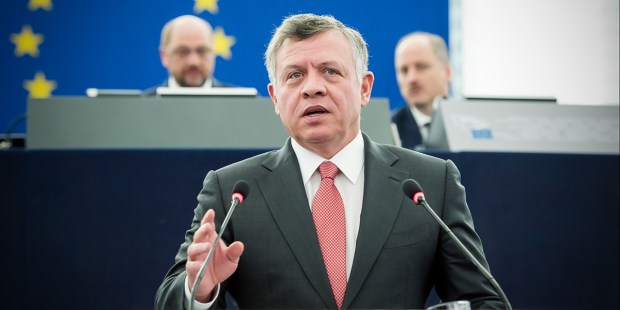 King Abdullah II of Jordan, has won the 2018 Templeton Prize. King Abdullah was awarded the prize, which carries a purse that is worth more than that of the Nobel Prize, for his work advancing religious harmony within Islam and between Islam and other religions.

The Templeton Prize, valued at 1.1 million British pounds, is one of the world’s largest annual individual awards and honors a person who has made an exceptional contribution to affirming life’s spiritual dimension, whether through insight, discovery, or practical works. It was established in 1972 by the global investor and philanthropist Sir John Templeton.

In announcing the choice Wednesday, the Templeton Foundation said that Abdullah has had a “long quest to promote peace-affirming Islam.” That quest picked up steam in 2004 in the wake of the Iraq war when the fragile unity of Sunni and Shi’a Muslims in the region was at substantial risk.

“During that period, increasingly vocal rhetoric from marginal Islamic groups threatened to create deeper schisms within the Islamic community, the statement said. “In the face of these challenges, the King launched the breakthrough Amman Message that articulated a clear understanding of the central elements of Islam, and affirmed that terrorism and violence have no place in the religion.”

The following year, the foundation noted, King Abdullah assembled 200 scholars from 50 countries representing all schools of jurisprudence in Islam who, under his guidance, issued a declaration now known as the “Three Points of the Amman Message.”  The first point recognized the validity of all eight legal schools of Islam. The second forbade declarations of apostasy (known as takfir) between Muslims, while the third established conditions for issuing fatwas, Islamic legal rulings. The Three Points have come to represent an unprecedented and almost unanimous religious and political consensus by Muslims around the world. Since then, more than 450 Islamic scholars and institutes from more than 50 countries have endorsed it.

In 2006, Abdullah supported and funded the initiative known as “A Common Word Between Us and You,” which led to a 2007 open letter from Islamic religious leaders to Christian religious leaders. A Common Word contains a call for peace and harmony between Muslims and Christians based on the twin commandments shared by both faiths, namely “love of God” and “love of the neighbor.” Originally signed by 138 Muslim leaders and scholars from 52 countries, it now has more than 400 signatories including nearly 300 endorsements from a wide range of Christian leaders, and is considered by many to be the most important Muslim theological initiative towards Christians.

In 2010, the king proposed the annual UN World Interfaith Harmony Week with a General Assembly resolution expanding the twin “love” commandments by adding “love of God or love of the good” to “love of one’s neighbor,” thus including all people of goodwill, with or without faith.  Adopted unanimously by the General Assembly, the resolution established the first week of February as UN World Interfaith Harmony Week to stress the moral imperative of promoting and understanding the values of peace inherent in all religions. It is generally acknowledged as the first and only time that the United Nations approved a resolution explicitly citing belief in God, the Templeton Foundation said.

The foundation noted that the king’s efforts to reclaim Islam’s moderate theological narrative from the distortions of radicalism “have come with great personal cost including condemnation and death threats from radical terrorist groups. As a result of Jordan’s key geographical location, his efforts have required extraordinary courage to advance cooperation within Islam and between Islam and other religions.”

In addition, the foundation said that King Abdullah has protected Jerusalem’s Islamic and Christian holy sites “at considerable personal and monetary expense.” It said that the Hashemite dynasty has served as Custodians of the sites since 1924, and in 2013 a formal treaty between President Mahmoud Abbas of the State of Palestine and King Abdullah II officially reaffirmed King Abdullah II as the Custodian of Al-Aqsa Mosque/Al Haram Al Sharif, one of Islam’s three holiest sites, and of the Church of the Holy Sepulchre, the presumed site of the crucifixion and tomb of Jesus.  In 2016 King Abdullah provided personal funds to restore the tomb, completing a restoration which had been abandoned since 1947.

In recent years King Abdullah pushed for legislation to restore and develop Al-Maghtas, also known as Bethany beyond the Jordan, on the Jordan River’s east bank, which most Christians consider the site of Christ’s baptism.  UNESCO unanimously approved it as a World Heritage Site in 2015.  He has ensured that various denominations received blocks of land to build churches there, and a conference center opened in 2012.

King Abdullah, in a videotaped acceptance of the Prize on http://www.templetonprize.org, said: “Our world needs to confront challenges to our shared humanity and values. They are the very ground of the coexistence and harmony our future depends on. And this is why I feel it is so urgent to promote tolerance and mutual respect, support inclusion and hope, speak out against Islamophobia and other wrongs, and make our values a real force in the daily life of the modern world.”

Abdullah’s leadership also has guaranteed safe haven for Jordan’s ethnic and religious groups, including several denominations of Christians who are free to worship according to their own traditions, the foundation said.

King Abdullah will be formally awarded the Templeton Prize in a public ceremony in Washington, D.C. on November 13.