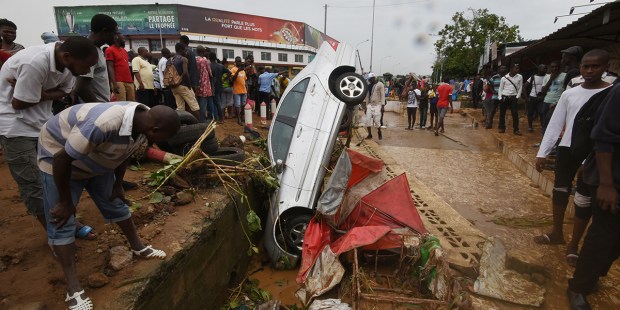 Death toll might have been lower if authorities had controlled rapid development, prelates suggest

At least 20 people died due to flooding caused by torrential rain in the West African nation of Ivory Coast, June 18-19. But the bishops of the Catholic Church there have blamed corruption and urban development for making matters worse.

“In a city as sprawling as Abidjan, witnessing rapid development and galloping urbanization, there are obvious risks of anarchic settlements which violate safety rules and natural topography,” the bishops’ conference said in a statement.

“But there has also been speculation around land expropriations very close to the danger zones. So we appeal for a serious accounting of conscience and for civic responsibility and engagement by everyone.”

Fides news agency reported that drainage and sewage systems are scarce or totally non-existent in parts of Abidjan, and rapid urbanization has ignored the sandy-clayey soil, which is not able to absorb large amounts of rain, especially in an area like Riviera Palmeraie, part of the municipality of Cocody.

In Cocody, many residents perched on the roofs of their homes, while dozens of people were welcomed in the local parish, Holy Family.

Other parishes opened their facilities to accommodate flood victims, but those buildings also suffered damage in the torrential rains.

In their statement, the bishops said the Church acknowledged the event as a “natural disaster” and was grateful to government officials who worked to save victims, but action was also needed to correct severe infrastructure problems ahead of any future weather event.

“We assure the state aid services, as well as the donors and well-wishers providing much-needed help and support, of our prayers of solidarity,” the bishops stated. “But we also launch a pressing appeal to all public authorities to act resolutely to ensure such catastrophes do not recur.”

On June 21, the government called for the evacuation of all people living in flood-prone zones, reported Al Jazeera. Interior Minister Sidiki Diakite said the government would demolish stalls and dwellings built over drainage routes and storm canals in a bid to prevent further fatalities, according to Catholic News Service.