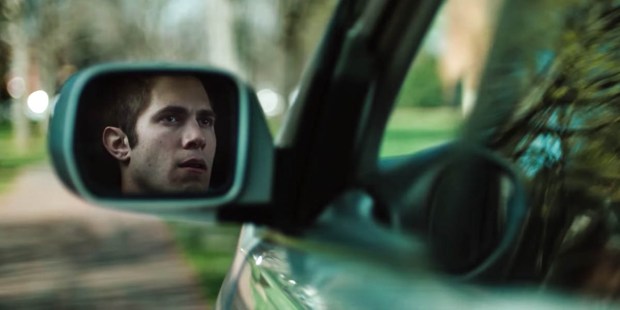 A genre-defying blend of true crime, dark comedy, drama, and mystery, American Animals tells the true story of four suburban college kids who gradually—and inexplicably—hatched a plan to steal rare books worth millions of dollars from the Transylvania University library in Kentucky 14 years ago. The four men—who spent most of their 20s in prison for the crime—participate in the re-telling, and in a few surreal moments, even cross paths with the actors playing them.

But what’s most impressive about the film is the way Layton brings the strangeness of this crime to a slow boil. The film is an extended meditation on this question: Why would four privileged, talented kids from good families in good neighborhoods, with good scholarships to good schools, concoct a crazy art heist like this, never mind act on it?

The film’s title and opening scene seem to point to unpredictable animal instincts. “We must suppose that American animals,” we read in the epigraph, “slowly migrated by successive generations from the outer world into the deeper and deeper recesses of the Kentucky caves.” The quotation comes from Darwin’s On the Origin of Species—one of the books that the young men eventually set out to steal. And their main target is another animal-oriented book: a glowing edition of Auduobon’s Birds of America.

But as the story unfolds, the symbolic power of these books shifts. It’s the post-Darwinian modern world outside—a world of oriented toward prosperity and success—that feeds on animal instinct. Spencer and Warren are lost and disaffected in that world—and it’s precisely their higher spiritual wants, surpassing their animal needs, that possess them. (A third book—seen in the film but not discussed—is a 15th-century text from England that was “edited” of references to St. Thomas Becket and the pope during the Reformation. If Brad Gregory is right about “the unintended Reformation,” this too has great symbolic power.)

Spencer doesn’t know who he is, and he knows it. He’s bored; he hasn’t made friends at college (drunken frat hazing is as good as it gets), and he’s waiting for something to make his life special. The wilder and more rebellious Warren is equally lost, but for him it manifests as disappointment. Walker Percy (quoting Cheever) said that “the main emotion of the adult Northeastern American who has had all the advantages of wealth, education, and culture is disappointment.” This is Warren’s malady, and he isn’t shy about it. He’s disappointed with his family, his school, his town, and the whole gorged country. As animals and consumers, their needs have been met 10 times over; yet they both feel what C.S. Lewis called sehnsucht—“the inconsolable longing in the heart for we know not what.” They’re spiritually starving.

So who decides that a heist is the answer? It’s not clear. Warren is known as (and appears to be) the ringleader, but insists that he simply took the “bait” that Spencer put out there. In a way, it’s almost as if the heist has somehow found them. They were lured by the money, the excitement, even the beauty of the books; they were seized by the idea of affecting great change by crossing this great red line together. But why this change? Why grand theft, deceit, and eventually cruelty and violence? American Animals offers no answer, because even their families and the men themselves seem to shrug. It’s a striking example of the great mysterium iniquitatis, the mystery of evil, which Henri de Lubac poetically described as our “mysterious limp.” (Indeed, Warren, disguised as an old man, limps his way to his crime.)

But things go from bad to worse, and fast. Not unlike the Adam and Eve after the Fall, they are immediately racked with fear, shame, and confusion, and begin to point fingers at each other. Here, the human animal just gets more peculiar still. Having committed this act, the young men can’t just move on. Instead, they nobly face down their evil and wrestle with its empty promise. “Man’s greatness,” Pascal wrote, “comes from knowing he is wretched: a tree does not know it is wretched.”

And then the day of reckoning arrives. The song choice for that scene is hard not to notice: “Who by Fire” by the biblically-minded poet and songwriter Leonard Cohen. The lyrics are adapted from the Jewish “Unetanah Tokef” poem, which is chanted on the “day of judgment,” Rosh Hashanah:

And who by fire, who by water,
Who in the sunshine, who in the night time,
Who by high ordeal, who by common trial,
Who in your merry merry month of may,
Who by very slow decay,
And who shall I say is calling?

And who in her lonely slip, who by barbiturate,
Who in these realms of love, who by something blunt,
And who by avalanche, who by powder,
Who for his greed, who for his hunger,
And who shall I say is calling?

At the end of this journey into the strangeness of the human creature, we find the strangest thing of all: a call to be reconciled with the Creator, to be found after being lost. That call is echoed in yet another spiritually-tinged track in the film’s close: “Crucify Your Mind.”

Human beings, Chesterton once wrote, are an exception. “If it is not true that a divine being fell, then we can only say that one of the animals went entirely off its head.” We are greater and more wretched than any other animal—and we have an insatiable hunger that nothing short of God himself could ever fill. In one telling scene after the heist, Warren looks down at a frozen “Hungry Man” meal in a grocery store aisle—still disappointed, and still not satisfied.

We are strange animals indeed, and American Animals is a portrait of us to remember.