Born of the rib of a partner group for boys, Fidelis is rooted in the "richness of the Catholic faith."

In 2008, a group of active Catholic lay people joined together to found Fraternus, a Catholic apostolate which provides boys with adult male mentorship to help them grow into virtuous Catholic men; four years later, the same group founded Fidelis, a counterpart organization for Catholic women.

Fidelis’ website describes the organization as a “sisterhood of women, young and old, leading each other to Christ … rooted in virtue and the richness of the Catholic faith.”  With the recent hiring of a new national director, Priscilla McKinney, Fidelis is looking to grow and expand its influence nationwide.

“Fidelis ‘came out of the rib’ of Fraternus,” McKinney explained. “When we saw the great success Fraternus was having with boys, we knew we needed a similar program for girls.”

A pilot program was launched at Our Lady Star of the Sea Parish in Bremerton in the Archdiocese of Seattle in 2012, with McKinney volunteering in a parish leadership role. The program has since expanded to eight other parishes in nine states with 400 young women participating.

McKinney said, “In our current society, if we leave young women to their own devices and expect them to lead lives of virtue, they’re bound to fail. Fidelis provides girls with the mentorship, leadership and community they need to grow into virtuous Catholic women.” 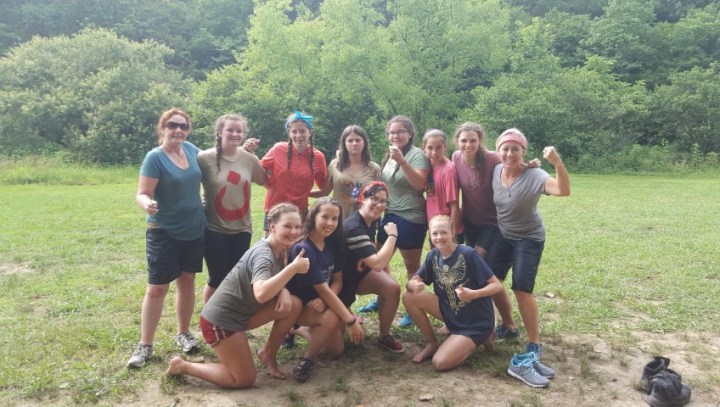 Beth Gill is a parishioner at Our Lady Star of the Sea who has had four daughters participate in Fidelis. She observed, “Fidelis not only helped my daughters grow in the faith and live moral lives, but kept them in the Church.”

Fidelis also offered her daughters the opportunity to establish lasting friendships, she continued, and has sparked their interest in other Church-related apostolates.

McKinney added, “These girls are learning what it means to be a daughter of God, and that they need to go out and serve other people.”

Mike Manor is a parishioner at Our Lady of the Lake Parish in Hendersonville, Tennessee. His son participated in Fraternus, so when Fidelis came to his parish he signed up his four daughters. He said, “The girls are excited about the different events in which they are able to participate. They enjoy the camaraderie, and spiritually, they know they have things they need to work on.”

The Fidelis program is parish-based and is organized and run by adult lay women volunteers. Participants must be females in grades 6-12. Components include weekly Girls’ Nights, periodic Excursions or weekend retreats, and an annual week-long Inspire outing.

The Girls’ Nights are typically held Wednesday nights, and involve socializing, discussion about a particular virtue, Scripture reading and prayer. Hannah Yellico, 17, a parishioner of St. Mark Church in Huntersville, North Carolina, has been participating in Fidelis for three years. She enjoys Girls’ Nights, she said, because “we get to talk about different virtues, and share the happy points of the week, the worst points, and we get to encourage one another.”

The regular meetings, she continued, have “given me a deeper understanding of my identity as a Catholic girl, and have definitely increased my prayer life.”

Excursions are weekend retreats, and Inspire is a week-long program involving a variety of outdoor activities. Inspire 2018 was held at the beginning of summer in the wilderness of Tennessee, and featured whitewater rafting, a high ropes course over the canopy, horseback riding, paintball, mountain biking and singing around the campfire. Also part of the program were daily Mass and prayer, and time for adoration. Some of the 40 girls who participated, McKinney said, “expressed that adoration was their favorite part of the trip.”

Michelle Cannon’s daughter, Rachel, 12, attended Inspire for the first time. She said, “Rachel had a great time doing the activities and fellowshipping with the other girls. She especially liked paintball and whitewater river rafting; she also found adoration special.”

The women who run St. Mark’s Fidelis chapter are “joyful and giving,” Cannon said, and Rachel doesn’t want to miss Wednesday nights. Among the things Rachel has learned, she continued, is the importance of modesty. Cannon said, “Even when we go shopping for a swimsuit, Rachel insists on something that is both fashionable and modest.”

To establish a chapter, volunteers must secure the approval of their pastor, and pledge to live their lives in accordance with Catholic teaching, so that they may be good role models to the girls. McKinney offers on-site training, and the national office supplies materials.

Fidelis’ most pressing needs, McKinney said, are for donors to fund the organization’s work and volunteers to establish chapters in their parishes. McKinney said, “We hoping to establish a legacy with Fidelis and want it to be an organization that will be around for a long time. We feel like we’re a part of something huge here, and we welcome any support that people can offer.”