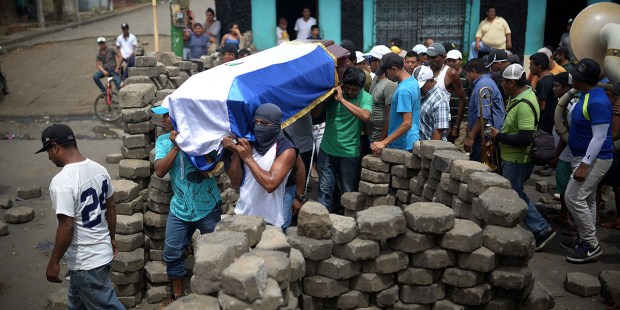 Urge government supporters to “make the decisions their conscience tells them to and commit to defending life, truth and justice.”

The bishops of Nicaragua have been trying to facilitate a peaceful end to the violence sweeping their nation. Instead they’ve found themselves the target of the government’s violent repression.

The bishops are now asking citizens to take part in a day of fasting and prayer on July 20.

In a letter released July 14 they said the day is to make up for the “acts of profanation against God that have been carried out in recent months.” They are asking people to pray the Exorcism Prayer of St. Michael, while fasting.

Composed by Pope Leo XIII after he had a vision of demonic spirits descending on Rome, the prayer asks the archangel Michael to “defend us in battle against principalities and powers, against the rulers of the world of darkness, and the spirit of wickedness in high places.”

The national day of fasting is part of a month of special prayers running from July 15 to August 15. During that month Catholics are asked to go to adoration of the Eucharist on Thursdays, fast on Fridays, consecrate themselves to the Immaculate Heart of Mary on Saturdays and renew their Baptismal promises on Sundays.

In their letter to citizens the bishops said the day of prayer is a call to “police, military and civil servants and those whose conscience is directing them not to continue directly or indirectly supporting [the government] that they might reflect seriously on the grave, urgent situation we are living, make the decisions their conscience tells them to and commit to defending life, truth and justice.” They also asked citizens not to respond to provocation with violence.

Nicaragua was plunged into violence April 18 when paramilitary forces violently crushed a demonstration against the government’s pension reforms. That sparked more protests and violent repression. Hundreds of people have been killed and thousands injured. Churches and clergy have been attacked and threatened by the paramilitary.