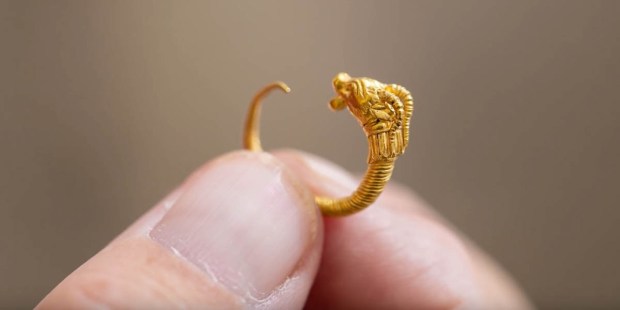 The earring may have been worn by a Greek or a local “Hellenised Jew.”

A gold earring discovered at an archaeological site just outside Jerusalem’s walled city dates back to the second or third century B.C., during the Hellenistic period, according to archaeologists working at the site.

The earring was unearthed during archaeological digs conducted by the Israel Antiquities Authority and Tel Aviv University, in the Givati Parking Lot in the City of David National Park.

The intricate piece of jewelr, measures 1.5 inches, and features a finely crafted head of a horned animal, such as an antelope or deer.

Amazing discovery in the @City_of_David of a 2,000 year old earring from the Hellenistic period! Each day, we discover more of the history of #Jerusalem for the benefit of all mankind.

According to archaeologists, the design, using a filigree technicue, is consistent with jewelry from the early Hellenistic period, between Alexander the Great’s conquest of Jerusalem and the Jewish revolt against pagan rule as recounted in the Books of Maccabees, reported Reuters.

This type of earring first appeared in Greece during the early Hellenistic period, according to researchers at Haifa university, reported the Jerusalem Post.

“This is the first time somebody finds a golden earring from the Hellenistic times in Jerusalem,” said Yuval Gadot, a Tel Aviv University archaeology professor, who told Reuters that the find was probably worn by a wealthy man or woman.

“It is unclear whether the gold earring was worn by a man or a woman, nor do we know their cultural or religious identity, but we can say for certain that whoever wore this earring definitely belonged to Jerusalem‘s upper class. This can be determined by the proximity to the Temple Mount and the Temple, which was functional at the time, as well as the quality of the gold piece of jewelry,” reported the Israel Antiquities Authority.

According to Gadot, the earring’s owner was probably a Greek living in Jerusalem or a local “Hellenised Jew.”

“We connect it to other things and maybe we will have a better understanding of Jerusalem — not just the text but how people really behaved here,” Gadot told Reuters.

Watch this video from the Israel Antiquities Authority: