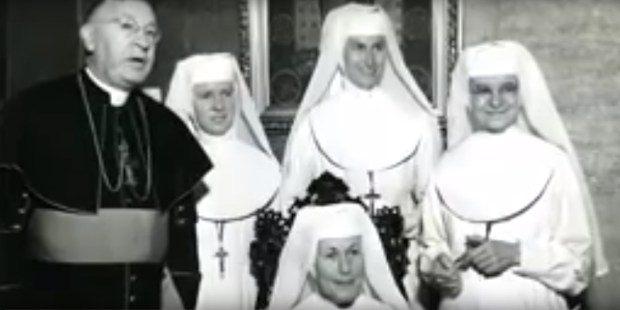 The journal recounting their harrowing experience is called ‘Trapped in Paradise.’

Last month, Aleteia ran a story about Our Lady of Puy. This is the site of the Blessed Mother’s very first apparition after her Assumption into Heaven.

A worldwide organization of sisters has its origins in LePuy: The Sisters of St. Joseph have more than 14,000 sisters around the world.

The Washington Post just told the story of four nuns of this California congregation, who became stranded behind Japanese enemy lines during World War II. As the Feast of the Assumption approaches, it is timely to hear their story.

Two of the Sisters were teachers, and two were nurses. They had arrived in the Solomon Islands in December 1940. These young women were new to missionary life, confronting an unknown culture for the first time, and did not speak the languages spoken on the various islands. Also, they had to learn how to get around the jungle. One year after they arrived, the Japanese attacked Pearl Harbor.

The Japanese quickly occupied many of the islands in the South Pacific. The nuns had been deeply involved in a village on the island of Buka. They had no idea that the Japanese wanted Buka for an airfield.

Sister Hedda Jager was the nun in charge of journaling their experiences. No matter what kind of day she was having, she always managed to record the day’s happenings.

As the Japanese get closer and closer, Sister Hedda records how their lives morphed from working as missionaries to being filled with sheer terror. They made it to Bougainville where they learned  how other missionaries in the Solomons had been tortured and executed.

Read more:
The heroic nuns who lost their lives in the Galveston hurricane of 1900

There were Marist missionary priests on the island and, knowing what the fate of the nuns would be if captured, they managed to hide the Sisters for months in the jungle. On New Year’s Eve 1942, the priests managed to get the Sisters and 25 others to the beach in Teop Harbor. It was then they all learned that a submarine would be their means of rescue.

On New Year’s Day 1943, in the early morning darkness, the submarine Nautilus pulled to within 100 feet of the beach and the terrified passengers were safely taken on board and brought to safety.

Sister Hedda wrote in her journal: “You cannot put into words the feeling that one has for those of one’s own country, especially when one is miles from home and running away from the Japanese.”

When the war ended the four Sisters returned to Buka to continue their work. The last of them passed away in 1999. These Sister of St. Joseph of Orange will forever remain a true inspiration to us all.

Sister Hedda’s journals have been published in book-form under the title Trapped in Paradise .

Read more:
My life for your freedom: After 800 years these priests still practice what they preach