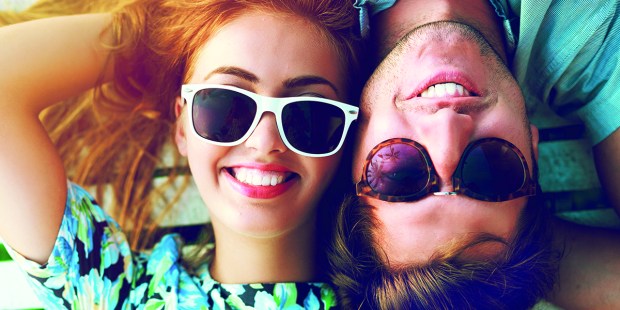 My best friend since childhood has always been able to make me laugh with minimal effort. Because of her, I’ve frequently found myself in fits of laughter that have me hunched over, struggling to catch my breath as tears streamed down my cheeks. No one in the world was ever able to have that effect on me.

That is, until I met my husband. From the earliest days of our relationship, he effortlessly had me cracking up. Now, amidst all of the serious conversations and upsetting squabbles we come upon, laughter is still one of the most common sounds in our interactions with one another.

Everyone, when describing their ideal partner, will say they want someone to laugh with. It’s as if we’re intuitively aware that too much seriousness saps the color from our lives. Even St. John Chrysostom said, “Laughter has been implanted in our soul, that the soul may sometimes be refreshed.” Throughout all the hurdles that a marriage faces and the demands and stresses of day-to-day life, it is vital for spouses to frequently relax into lighthearted humor with one another.

Science even affirms it, according to Reader’s Digest, which summarized a conclusion found by University of Kansas associate professor of communication studies Jeffrey Hall, after extensive research. “It’s not about being a great comedian, but finding what’s funny in the everyday and enjoying it together,” Hall explained. Examples he gave were TV shows both partners find comical, relaying funny statements made by the kids, and “relishing in the absurdity of life,” as he put it.

Hall clarified that there’s a difference between laughing with a partner and laughing at them. It’s critical to be alert to and respectful of one another’s sensitivities, because “making your partner the butt of too many jokes … undoes the magic of shared laughter.”

For a while, my husband would playfully challenge me to identify the artists of certain classic songs that came on, knowing that, in all likelihood, I wouldn’t be able to. Obviously, I knew he wasn’t trying to be the least bit condescending, and normally I’m not oversensitive to sarcastic criticism. But I found this particular quip of his irritating and ultimately, it just made me feel stupid. When I finally voiced that to him, he was extremely understanding and apologetic and now, being further into our marriage, we’re more in tune with when and how we can playfully criticize one another versus when it simply feels degrading.

But when a couple does laugh together about things they both genuinely find funny, few things are more delightful. It’s an act of the body that exudes happiness and relaxation and when done with someone you love, it’s “magic,” as Hall puts it.

In fact, laughter is so beneficial that a doctor in India actually sees it as an integral part of treating his patients. Dr. Ashok Sukhumal Aswani “gives Charlie Chaplin DVDs to his patients alongside his usual prescriptions,” Good News Network explains. The late Charlie Chaplin, a renowned comic actor from the early 20th century, earned Dr. Aswani’s esteem decades ago with his movie, The Gold Rush. Apparently, Aswani “laughed so hard, he fell off his chair – and after seeing the movie 200 more times, Chaplin’s theatrics can still make [him] laugh.”

It’s endearing that Dr. Aswani cares enough about his patients to provide humor in addition to treatment for their physical ailments, because so often, we neglect the treasure of laughter, even in our relationships.

“[It’s] easy to take relationships way too seriously,” Jonathan Bennett, a life and relationship coach, acknowledged to Bustle, before emphasizing the importance of goofing off together every once in awhile.

Personally, I love being around couples who can return to that puppy love, light-hearted, flirty laughter phase of their relationship, even after decades of marriage. Sometimes, my dad teases my mom for her sweet, classic quirks and she laughs so hard that tears emerge. What’s more blissful than experiencing the lightness of a good laugh induced by the love of your life?

There are, of course, plenty of qualities to take into consideration when discerning if someone is the person you want to spend your life with. Just because their sense of humor meshes impeccably with yours, doesn’t mean you’re meant to meet them at the altar. Nonetheless, even if someone meets every quality you’re seeking, but natural, feel-good laughter simply doesn’t happen between the two of you, it just might be a deal breaker. Think seriously about whether you want to travel through life alongside someone you do not experience those liberating, feel-good belly laughs with.

As the saying goes, “The goal is to laugh forever with someone you take seriously.”