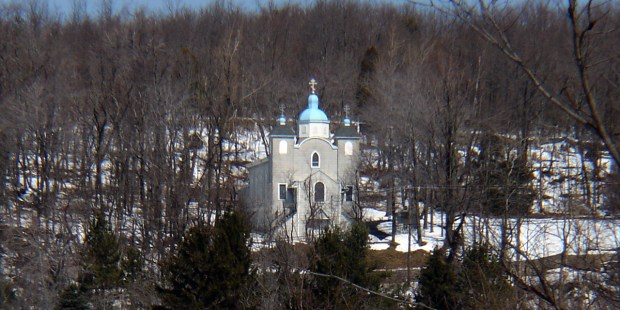 The Ukrainian Catholic Church of the Assumption of the Blessed Virgin Mary in Centralia is one of the few functioning places left in a town that was once home to over 3,000 people. About seven people live in Centralia today, in a desolate landscape being reclaimed by nature.

Under the earth a coal mine fire that began in in 1962 continues to burn, making much of the land unstable and the air quality hazardous.

But Assumption Church will hold the third annual “Called to Prayer Marian Pilgrimage” on Sunday, August 26, with bishops leading prayers and offering reflections.

Ukrainian immigrants settled in the region beginning in the late 19th century, to work in the coal-mining industry, Fr. Michael Hutsko, pastor of Assumption, said in an interview.

“And they desired to have a church of their own, of their own tradition and heritage,” he said. The white church with three blue onion-shaped domes was opened in 1912.

The coal mine fire didn’t cause much alarm at first. But by the late 1970s and early 1980s it began to pose a serious threat: a gas station owner found that the gasoline in his underground tank was at an abnormally high temperature, and a boy fell into a sinkhole that the fire had opened up suddenly. Multiple efforts to extinguish the fire failed. Congress allocated funds for residents to relocate, and hundreds of people accepted buyouts of their properties. Many resisted, however, and the state government finally had to invoke eminent domain. In 2002, the U.S. Postal Service discontinued Centralia’s zip code.

“When people moved out, their homes were immediately demolished, and as the years have gone by nature has reclaimed everything,” said Fr. Hutsko. “What you see now are crumbling sidewalks, a street grid, and nature that has reclaimed every block where homes use to be.”

Tests around the church found that the structure was built on solid rock. There is no coal underneath it, so there is no danger of the fire reaching that area and undermining the foundation.

Several holdouts in town won the right to live out their lives in their homes. Fr. Hutsko buried the last parishioner who was among this small group about five years ago. About seven residents remain today.

So what is there in Centralia, about 115 miles northwest of Philadelphia, to justify a pilgrimage?

In late 2015, the head of the worldwide Ukrainian Greek Catholic Church, Major Archbishop Sviatoslav Shevchuk, toured the area. When he arrived in Centralia, he was “just amazed that people were relocated, the town was deserted, and yet at the top of the hill, Ukrainian Catholics still were ringing the church bells each Sunday, calling people to prayer,” said Fr. Hutsko. “It was just a real, visible symbol that God remains with his people at all times, even through disasters, through desertion.”

When Archbishop Shevchuk entered the church, high on a hill overlooking Centralia, he had a feeling that he was in a holy place, Fr. Hutsko said.

“I went on to explain about the number of vocations to priesthood and religious life originating among the families of the parish, and it just reinforced his feeling that there was a holiness there that can be easily touched and experienced, and that holiness led to these vocations,” the priest recalled.

One of them was Franciscan Fr. Theodore Wenick, born and reared in the parish. He went on to serve the indigenous peoples in Argentina . Archbishop Shevchuk, who served as a bishop in Argentina before his election in 2011 as major archbishop, knew of Fr. Wenick’s reputation among the people.

“When he returned to Ukraine, [Shevchuk] wrote a letter declaring that this parish would be a place of prayer for all people,” Fr. Hutsko said. “So in 2016, we had our first pilgrimage.”

Three hundred to four hundred pilgrims have been coming each year, and this year Fr. Hutsko is hoping for 500. Pilgrims participate in a living rosary, venerate a historic and jeweled 18th century copy of the Icon of Our Lady of Pochaiv, sing a traditional Byzantine hymn to Mary known as the Akathist to the Mother of God, and process to the church for the celebration of a Moleben, or prayer service. The choir from the Ukrainian National Shrine of the Holy Family Washington, D.C., this year is singing the liturgical responses.

The pilgrimage commemorates the Assumption of Mary, called the Dormition in the Byzantine tradition. While that feast is on August 15, there are already a number of celebrations in the Ukrainian Archeparchy of Philadelphia, which covers Centralia. So the parish decided to hold the pilgrimage on the Sunday closest to the Dormition following the Julian calendar, which is August 28. So the event generally falls on the last Sunday of August.

As for the parish itself, Fr. Hutsko said it is “stable.” About 50 people, former residents of Centralia, attend Divine Liturgy on Sundays and holy days of obligation, driving from the surrounding communities.

“We have a great intergenerational mix of ages and people, from 90 years old down to infants and young families,” he said “It’s a parish that, as a pastor, it’s very easy to care for, because the people understand what loss means and what the loss of a community is, that their desire to preserve this as a place not just as a gathering to express and share their faith and to pray but also to keep the church of Centralia alive and real in their lives. Because they lost their homes, they lost their neighbors, they lost their civil community. But our church continues to call them back to be not only Ukrainian Catholics, Catholics, but also to be citizens of Centralia, still.

“It serves a really great purpose, in my mind,” he continued, “when a church is called to be not just the place we come on Sunday but a place that informs us who we are as God’s people and preserves that.”