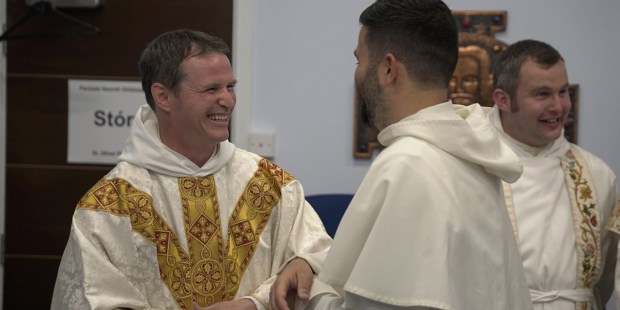 Fr. Philip Mulryne gave up fame and fortune to become a Catholic priest.

On the second day of the World Meeting of Families in Dublin, one of the sessions was entitled “Celebrating Family and Sport,” and was led by Bishop Paul Tighe, Secretary for the Pontifical Council for Culture.

The focus of the session was highlighting the successful integration of faith with sports, and among the panelists was former Manchester United star Fr. Philip Mulryne.

Fr. Mulryne played professional soccer from 1996-2008, during which he became quite successful. According to Mulryne, when he “moved to Manchester, I left my faith behind and became engulfed in this world of materialism and celebrity … and got lost in it.” He bought cars and houses, Mulryne said, “thinking that they would make me happy.”

Throughout his career there were various signposts that started to nudge him back to the practice of his Catholic faith. For example, while traveling in Europe, a teammate invited him to Mass and they had to travel many miles to find a Catholic church. It was a great sacrifice that had a profound effect on him. This and other moments of inspiration slowly began to work on him, turning his heart back to God.

Then in 2007 and 2008, Mulryne began to see a gaping hole in his life, recognizing that these material things did not fulfill him. In the meantime, his sister began sending Catholic books to him and encouraged him to practice his faith.

In 2009 Mulryne decided to return home, with the intention of returning to the world of professional soccer. However, his sister helped him discover his faith anew. Mulryne began to attend Mass every Sunday and developed a life of prayer. In the midst of it all, he stared to recognize that God may be calling him to become a priest.

He then gave up his dreams of returning to soccer and began studying for the priesthood. Initially he intended to become a diocesan priest, but then transferred to the Irish Dominicans. After several years of formation, Mulryne was ordained a priest on July 10, 2017.

Concluding the session, Mulryne gave powerful advice on how to integrate family, faith and sports. Mulryne said, “For me, it’s about having your life in order and everything ordered together. And when you have your faith, family and sport life ordered … the resilience is there to meet any crises in life … if you are solely concerned about success and sports, then your life is out of balance.” The key is to keep everything properly ordered, ensuring that you are not led astray by the lures of the world to neglect either faith or family.

Read more:
Inspirational testimonies by Irish youth give hope to the world