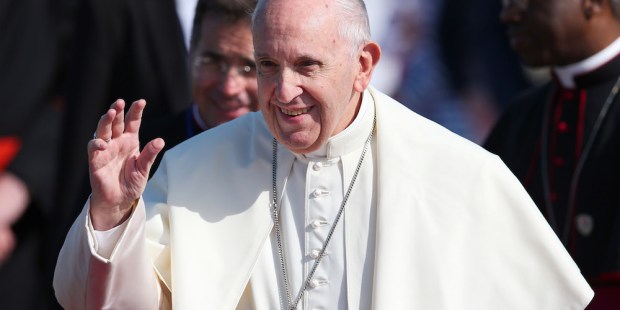 The Holy Father is greeted by civil authorities, signs a guest book and plants a ceremonial tree at president’s house in Dublin.

Pope Francis arrived in Dublin this morning, welcomed by local clergy and civil authorities, before being escorted to Áras an Uachtaráin, the official residence of the President of Ireland, Michael D Higgins. There, he signed a guest book with a warm message written in English.

The words of @pontifex written in the book at Áras an Uachtaráin #popeInIreland pic.twitter.com/oSkRSNEVFV

The Holy Father then held a private meeting with President Higgins, before planting a ceremonial oak tree in the gardens of Áras an Uachtaráin

.@Pontifex plants a native Irish Oak in the grounds of the Áras https://t.co/7VJB2h1lHi pic.twitter.com/xpLJpgcvMz

Next on his schedule is to give an address at the Dublin Castle, before touring around the city of Dublin.

Later this evening the Holy Father will give a speech to all those attending the Festival of Families, a musical celebration featuring Andrea Bocelli and Riverdance.