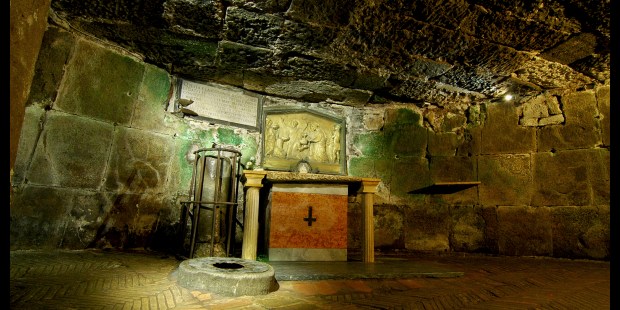 The 16th-century chapel was built over Rome’s Mamertine Prison

The roof of the Roman church that was built over the prison where Saints Peter and Paul were held before they were put to death, collapsed today, according to a Reuters report.

Roof of church built on top of ancient prison said to have held Peter and Paul collapses in Rome, no injuries reportedhttps://t.co/YkYpFHBl2B

There were no reported injuries as the church, San Giuseppe dei Falegnami (St. Joseph of the Carpenters) was closed to the public at the time.

The damaged church was built in the late 1500s over the Mamertine Prison, which tradition tells us, was the place where St. Peter and St. Paul were held before they were executed.

According to legend, while imprisoned, Saints Peter and Paul converted their jailers, Martinian and Processus, who after they were baptized, were arrested and martyred under emperor Nero’s orders.

An inspection of the church revealed “wooden beams and terracotta tiles were scattered in piles across the floor of the church, and one beam crashed through the floor and vaulted ceiling of a chapel below, “ according to the Reuters report.