‘The Apparition’: New film based on alleged appearance of the Virgin Mary 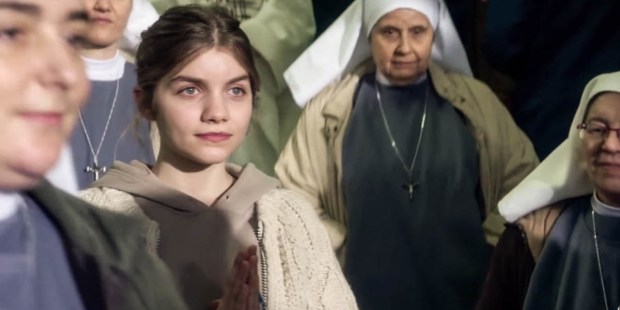 Many people are surprised to learn that belief in apparitions outside of those that appeared in the Bible, Marian or otherwise, is an optional thing in the Church. Surprise or not, It’s a fact that acceptance of such matters is left to the individual. So, when someone makes the claim that Jesus has appeared in their grilled cheese sandwich, Catholics are, if they feel so inclined, free to roll their eyes just as much as the next person.

However, not every claim to private revelation is as frivolous as finding the Lord in foodstuff. Some of them just might be true. The trick for the Church is in weeding out all those assertions which are demonstrably false from the few that are actually worthy of attention. And weed she does. Of the hundreds of alleged appearances of Mary over the centuries, only about 12 have been deemed by the Church to be safe for devotion.

It’s that process of determining the veracity behind such visions which provides the framework for writer/director Xavier Giannoli’s new film, The Apparition. The story follows investigative journalist Jacques Mayano (Vincent Lindon) as he is tapped by the Vatican to participate in the investigation of an alleged appearance of the Virgin in a small French town. Having recently suffered an injury and lost a friend during a wartime assignment in the Middle East, Jacques is reluctant to get back in the field. There’s something about this story that pulls at him, however, and Jacques soon finds himself in France immersed in a world alien to his agnostic outlook on life.

A good portion of the movie is procedural in nature as we watch as Jacques and his crew meticulously pore over all the evidence. Part of the process involves subjecting the teenaged girl at the center of the incident, Anna (Galatéa Bellugi), to medical and psychological examinations to eliminate the possibility she is lying and/or insane. The motivations of the local priest and others around Anna are thoroughly investigated as well. There is, after all, big money to be had in the apparition business, as the movie makes abundantly clear in scenes where we see Anna’s face being plastered on postcards and paperweights for faithful pilgrims to purchase.

Along with following the investigation, the narrative offers a story more personal in nature. Having seen much of the worst the world has to offer, Jacques is, as one character in the movie describes him, a man who is empty. As the movie progresses, he very reluctantly comes to realize he may be looking for more than just the truth behind Anna’s claims. Jacques may be searching for a greater truth to fill the void within himself.

All that probably sounds like the setup for a nice Hallmark ending where everyone gets what they need and smiles at the camera as the credits roll, but this isn’t that kind movie. The film does at the very end get around to answering if Anna has been lying the whole time, yet it does so in a way that leaves other questions in its place. In the end, Giannoli doesn’t seem so much interested in whether or not the object of one’s faith can be verified as he is in the importance, perhaps absolute necessity, of having faith in something to begin with.

Now, the movie takes its time getting to this point. Like the investigatory process it depicts, The Apparition is slow and deliberate in reaching its conclusions. While some will no doubt find such an approach boring, most should find the movie will hold their attention all the way through. This is due in no small part to Lindon and Bellugi, both of whom deliver excellent performances and keep you invested during those moments when the story drags a little.

The best thing, though, is that the film treats the subject matter seriously and with respect, a small miracle in and of itself given these skeptical times. Also, with the exception of one obviously duplicitous profiteer, the film has no real villains. There’s not a single evil priest to be found. Of course, that just goes to show the film wasn’t made in Hollywood. All in all, The Apparition is a solid recommend. Keep in mind, however, that’s no guarantee you’ll like it or agree with the conclusions it draws. Like belief in apparitions themselves, that will be left up to you to decide.

The Apparition will begin making its way to select theaters beginning September 7.