Hope radiates from a Catholic center for students at Yale University

Today, Catholics account for approximately 25 percent of the student population, but it was not always that way.

A life-sized cardboard figure of a smiling Pope Francis greets you at the Thomas E. Golden, Jr., Center, in the middle of the city of New Haven, the enchanting city that hosts one of the best universities in the world, Yale.

Today, Catholics account for approximately 25 percent of the student population, but it was not always that way. In 1910, Fr. T. Lawrason Riggs, who would go on to become Yale’s first Catholic chaplain, graduated as one of only eight Catholics in the whole university. The Chapel was built in 1937 and the Thomas E, Golden, Jr., Center was built in 2008.

Yale used to have a small number of Catholics, but now one-quarter of the student population is Catholic, which is closer to 3,000 students total. Of course, not all of them participate in Catholic life, but a higher than national percentage do. So there are in fact many students actively participating at the Catholic Chapel and Center. Also, it was really when Fr Bob Beloin was appointed Chaplain in 1994 that he and the board embarked on an expansion of Catholic life at the University. This was an expansion, programatically, physically, intellectually, spiritually and sacramentally. Today, that space is the Saint Thomas More Catholic Chapel & Center at Yale University, in the center of the city.

The priest in charge, Fr. Bob Beloin, has been diagnosed with brain cancer. Often it is the case with successful projects that the person behind them is of fundamental importance; that’s the case with Fr. Bob and the Yale Catholic center. Ever since the students found out about his illness, Fr. Bob has been receiving daily visits and letters, showing how he is an inspiration for all of them. Among this group of students and members of the community has arisen the initiative “Cooking for Fr. Bob,” which consists of volunteers who cook a meal for the chaplain while he’s convalescing.

The center offers two places to pray: a proper chapel, and another architecturally evocative space built of wood with round stained-glass windows. At the center, the Bible rests on a lectern made from the wood of the tree that had formerly stood in that location, which was a garden.

The center was able to be built and the ministry and programs endowed thanks to donations totaling $75 million. Kerry Robinson, one of the project’s promoters and the director of the capital campaign to expand Catholic life at Yale, tells Aleteia that today the space is “a vibrant space for prayer, lectures, meetings, conferences, seminars … but also for study and informal encounters among students.”

The library has two areas, and the students have everything from pool tables to spaces for eating and gathering. Catholic life in cities where Catholics aren’t a majority “needs spaces,” adds Margaret Lukaszyk, development director of the center, who is the one who gives us a tour of the building.

The center’s chaplaincy offers opportunities for formation and pastoral counseling, as well as trips and retreats. This year, the trip was to the ecumenical community of Taizé, in France.

Every year, there are conversions, and the students are baptized in a large baptismal font in the church.

The Center looks for inspiration to St. Thomas More, the great English jurist, writer, poet, theologian, and statesman who was executed for his opposition to the separation of the Church in England from the Roman Catholic Church. Thomas More’s most famous work is the book Utopia; at Yale, this utopia is finding its place. 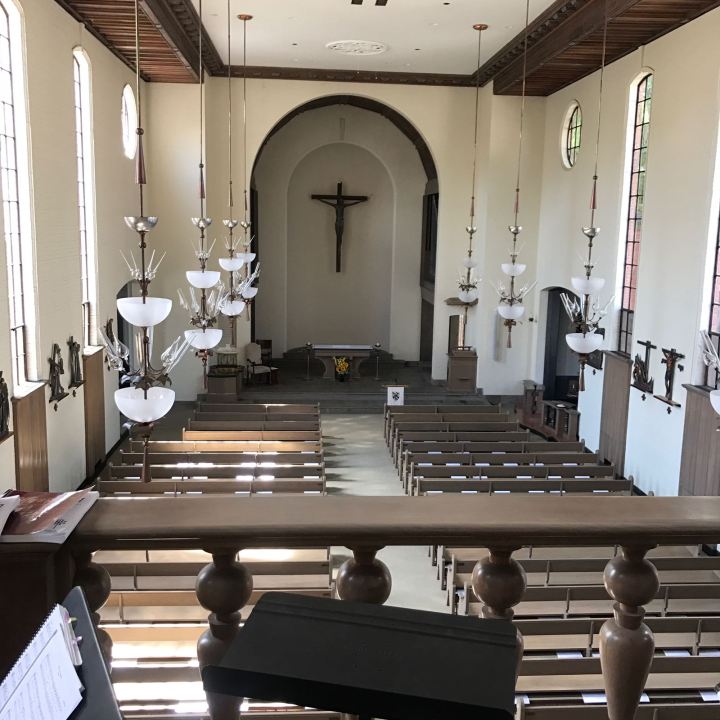