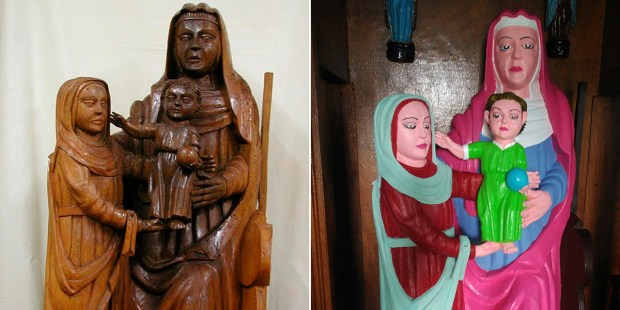 The result of restoration efforts gone wrong have not failed to impress us in the past few years.

First came the accident of Borja church, where an 81-years-old amateur restorer turned a 1930 fresco depicting Jesus into a work of surrealism, where Christ is shown with a blurry ape-like face. Then, few months ago, it was a 16th-century statue of St. George, located in the Church of San Miguel de Estella, northern Spain, which was turned by a well-meaning but poorly skilled sculptor into a cartoonish version of itself.

And this week, Spanish amateur restoration is making headlines once again. This time, the “victim” of unorthodox refurbishment  is a set of 15th-century wooden statues depicting the Virgin and Child with St. Anne and St. Peter.

The statues, located inside the town chapel of Rañadorio in northwest Spain, were painted using bright-colored industrial enamel paint which turned them into a David Hockney-esque version of themselves, including a green-haired Virgin Mary and an “eyeliner-ed” St. Anne.

As The Guardian reports, fifteen years ago, locals had agreed to a more “sober” restoration which was signed off and paid for by the local culture department. But  María Luisa Menéndez, a local shop owner, was apparently not fully satisfied with the result. So she picked up paint and brush and unleashed her creativity onto the holy objects.

“I’m not a professional painter but I’ve always liked painting and the statues really needed painting” she told Spanish daily El Comercio newspaper, “The neighbors liked them too. Ask around here and you’ll find out.”

Menéndez added flashy colors to all of the statues—including the one of Mary with St. Anne and Jesus which was originally bronze-colored—stating that they previously looked “a bit tired and dull.”

According to another local woman, who does not share Menéndez’s aestethics, this episode and the other previous botched jobs around the country are a symptom of lack of sensitivity towards “art in its original state.”