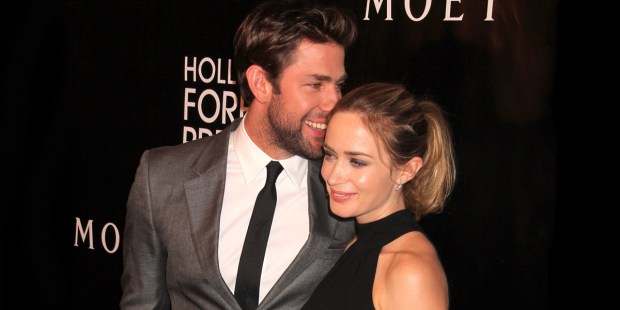 It’s exhausting at times, but the actor refused to let his movie career separate him from his family.

Actors John Krasinski and Emily Blunt are well on their way to becoming America’s favorite real-life, movie star couple. Last summer they totally captured many people’s attention with their side-by-side performances in the thought-provoking and surprisingly pro-life thriller, A Quiet Place. And this year, they’re melting our hearts as they describe their total commitment to making family time an absolute priority, despite their busy, cross-continental lives.

While Blunt and Krasinski, who’ve been married since 2010 and share daughters Hazel, 4 and Violet, 2, were each filming projects an ocean apart, they made sure to see each other virtually every single weekend. Krasinski, who was filming Jack Ryan in Montreal, would finish his hectic filming schedule on a Saturday morning, and hop a plane to fly to London (a staggering 6,496 miles) to see his family — on location for Blunt’s filming schedule for the upcoming Mary Poppins sequel. It wasn’t a long vacation though, as he was due back in Canada the very next Monday morning.

“Family for me, it’s a non-negotiable thing,” Krasinski told People in an recent interview. “So if I’m honest, I was shooting 6,000 miles away from them, and I flew back every single weekend. They were with her, and we always set up a base, and I always want the base to be with their mom, and I’ll do the flight time.”

While the actor did mention that all those airline miles across the pond could indeed be brutal, he humbly added, “I think that there’s nothing you can complain about in this business, you know what I mean? We are all so lucky to be doing what we’re doing. If there’s one thing that’s a bummer, it’s that you spend time away from your kids. But guess what, a lot of people spend time away from their kids. So for me, I think we’re all living in a fantasy camp. So I’m not going to be the first one to complain.”

These two may be incredibly famous, high-profile actors, but their dedication to each other, their children, and some semblance of normalcy is inspiring, adorable, and downright romantic!