From tattoo artist to diocesan director of evangelization: What a journey 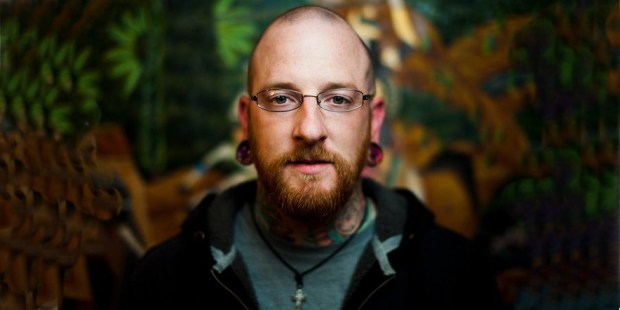 Matt Simmons found the Church thanks to his wife and the Catechism, and then he started sharing it with everyone he could.

Matt Simmons remembers the exact moment he accepted Jesus into his life. It was in the bathroom of his Lincoln, Nebraska, tattoo shop. He had finished reading Lee Strobel’s book The Case for Christ and couldn’t keep Jesus away any longer. He knelt down on the bathroom floor and put his life in God’s hands.

Today he is the Director of Evangelization for the Diocese of Lincoln. He also provides spiritual direction and runs a ministry aimed at helping people to have a relationship with God. But Simmons wasn’t always focused on doing God’s work, or even thinking about God.

In 2006, while struggling with addiction, a friend introduced him to a Protestant Evangelical Church. Simmons started attending services and “came into relationship with God.” That relationship helped him overcome his addictions.

At the same time he met his wife — a cradle Catholic who had recently returned to practicing her faith.

He told Aleteia he wanted her to give up Catholicism but she wouldn’t hear of it. So Simmons tried to understand why she would be so attached to Catholicism. He started meeting with her priest and reading the catechism — the book that lays out everything the Church teaches.

He soon found himself on a mission trip with his wife. During that trip he met the Missionaries of Charity and learned about their spirituality. While helping the sisters in their Calcutta home, “I saw Jesus. It was in a dying man I was holding,” he said.

Read more:
I put away my camera in Calcutta … and learned to see

He returned to the US and — though he was still a student at a Protestant Bible school — he started attending daily Mass. He also started praying the Liturgy of the Hours. He was self-employed, working in a tattoo shop so he could make his schedule accommodate his prayer times.

In 2008 Simmons was baptized into the Catholic Church. He also opened his own tattoo shop because he couldn’t find the right environment to work in. “Everywhere else was too sex, drugs and rock n’ roll for me,” he said.

He soon realized the tattoo shop (Sacred Heart Tattoo) was a perfect place to evangelize. Clients would be on his table for hours at a time sometimes, and the only thing they could do was talk. “It’s like being a bartender,” he said. He ended up helping several men join the Church. He helped some of his Catholic clients return to the practice of their faith.

Simmons said every Christian is called to evangelize and bring God to their sphere of influence. “It’s all we have,” he said.

In 2011 Simmons did the Spiritual Exercises of St. Ignatius in Everyday Life. It is an adapted version of Ignatian spiritual exercises for lay people who can not take time off to do the traditional version.

That experience led him to close his tattoo shop and start Sacred Heart Ministries. The goal of the ministry was simple: help Catholics see their faith as a whole way of life, not a set of rules and beliefs. Simmons told the Southern Nebraska Register, “I am moved with desire to help other people find what I’ve found.”

“Prayer is the core of everything, the point of the Church is to have a relationship with God,” he told Aleteia. “Saints are not saints because of what they do, but because of their intimacy with God.”

This means getting away from the idea of prayer as a way to get something. Simmons says any relationship is about sharing. A relationship with God is no different, it just happens through prayer.

Read more:
Prayer is not about self-improvement, as my newborn reminds me

Yet that relationship won’t look the same for every single person. Simmons says though there are some basic principles to follow, people tend to get fixated on a “one size fits all” model of prayer.

“God speaks to each person differently,” Simmons said. Having a spiritual director or someone who can “show me how” is invaluable.  Simmons provides spiritual guidance as part of his ministry. He recommends anyone trying to deepen their prayer life have a director or someone to talk to who has experience with prayer.

“God wants our heart. We have to acknowledge what’s happening in it, be real with Him, release that to God,” said Simmons.

Learning how to relate to God that way can be humbling, but Simmons says the reward is worth it. “I’ve seen people come alive.”

Simmons says there are three things anyone can do to start working on their relationship with God:

First, ask God for the grace to pin your heart to him “authentically.”

Second, pray with Scripture. Do some Lectio Divina. Whatever sticks with you, stay with it for awhile.

Third, when approaching the Eucharist, honestly acknowledge your heart and honestly relate to Jesus what is happening in your life.