Voters in Nevada have chance to make prostitution illegal again 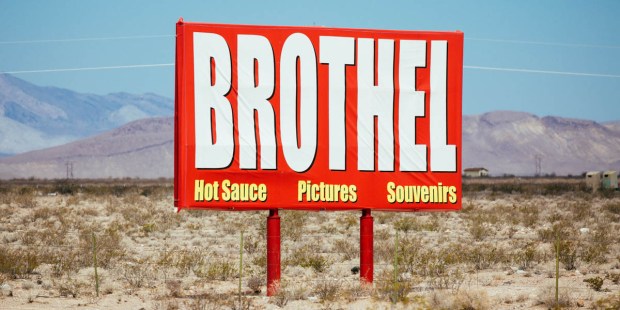 Prostitution has been legal in certain Nevada counties since 1971, but there’s a chance that in one county at least, brothels could be put out of business after Election Day in November.

Lyon County voters will be asked if the county’s Board of Commissioners should end legalized prostitution. If the majority say yes, the board could vote to ban brothels, according to the Los Angeles Times. There are currently four legal brothels in the county.

Nevada law allows counties with populations of less than 700,000 to license brothels, and the 21 brothels that now operate in the state are in rural counties. According to the New York Review of Books, there are legal brothels in Lyon, Nye, Lander, Elko, White Pine, Mineral, and Storey counties. There are three other counties where prostitution is legal but there are no brothels.

The drafting of the advisory question stems from a petition by the anti-sex trafficking group No Little Girl, according to the Reno Gazette-Journal. It’s likely the Board of Commissioners will follow the voters’ will. County Manager Jeff Page said in his 33 years working for Lyon County, he had never seen the board go against the will of the voters on an advisory question that passed.

Also leading the fight against the brothels in Lyon County is the End Trafficking and Prostitution PAC, according to the Washington Post. The group is pushing for a similar measure in nearby Nye County. If successful, the group plans to move to other Nevada counties and is considering a campaign to make a statewide change to the law. It says that in allowing brothels, the county effectively codifies exploitation.

Melissa Holland, who runs the nonprofit Awaken in Reno, which works to end sex trafficking, said many of the women involved in the sex trade—including those in legal brothels — were exploited as children and continued into sex work, the Post reported.

“They turn 18, and they’ve grown up in a state that says, ‘Hey, this is a viable option for you, so let’s legally continue the exploitation,’” Holland told the newspaper. “That’s not choice. These women were not raised to actually look at themselves and choose this. They have been told this is what you’re good for, and Nevada has said let’s make that a viable option.”

Her organization has helped many women across the state leave prostitution and find other work, she told the BBC.

Brenda Simpson, who is also with the End Trafficking and Prostitution Political Action Committee, compared the issue to slavery.

“It used to be considered OK to bring slaves from Africa,” Simpson told the BBC. “And finally, someone had the courage to say, ‘No, we’re not going to have slavery.’ This is just a different kind of slavery. These women in the legal brothels are slaves.”

Holland, of Awaken, quoted a study of a Nevada’s sex industry by a California academic which concludes that legalized prostitution improves conditions for pimps and brothel owners, rather than for the women who work there. It denounces an almost cult-like atmosphere in many legal brothels, which prevents employees from talking candidly about the dangers they face, including drugs and sexual assault.

In Nye Country, opponents of prostitution failed to get enough signatures to put a referendum on the ballot.

Salli Kerr is executive director of the nonprofit No To Abuse, which has worked with victims of domestic violence, sexual assault and sex trafficking in Nye County since the 1990s. She agreed with backers of the measure that the brothel industry engaged in sex trafficking and victimized women.

But Dennis Hof, 71, who operates brothels in Lyon and Nye counties, is appealing to what he says is Nevadans’ reputation as libertarians.

“Here’s the way I look at it,” said Hof, who won the Republican primary last month for a state Assembly seat. “This was about freedom. You might not like prostitution or you may never be a customer, but what they’re saying is — don’t take any of my freedoms away.”

Julie Bindel of the New York Review of Books wrote of her experience visiting one of Hof’s brothers in 2011:

During my visit, I saw Hof treat the women as merchandise, and witnessed first-hand his employees’ misery. Hof referred to the women as “hoes,” and, as several attested to me, he would often grab their breasts and crotches when they walked past. The women who worked in his brothels were required to line up whenever a john appeared, and were told they were not to smile or move; instead, they should stand very still, staring straight ahead. I also witnessed Hof demand sex from any of the women who took his fancy.

Bindel maintains that Hof, who has written a book about his experience and has been the subject of an HBO reality show, uses his public platform to make claims about legalization’s being the solution to trafficking and other criminal activities in the sex trade.

She wrote that in 2015 Hof claimed to be working with state legislators to discuss ways to end trafficking.

But one legislator now is working on banning brothels like Hof’s. Joseph Hardy, a Republican in the Nevada Senate, is reportedly submitting a bill draft request, the preliminary stage of any legislation, to ban brothels statewide.