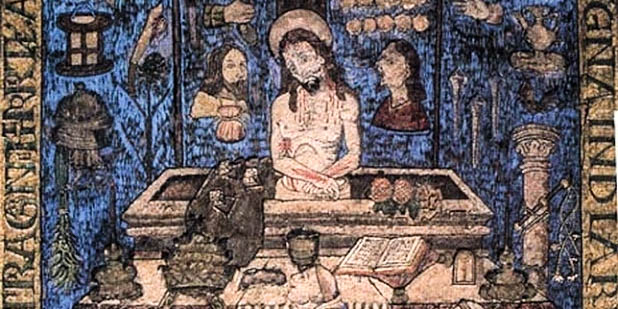 America’s oldest Christian work of art, dating back to 1539, was created by Aztecs for Franciscan monks in Mexico City.

The mosaic depicts the miracle of the Mass of St. Gregory the Great (540-604), in which Christ appeared above the altar while the pope was celebrating Mass. The scene, rendered with colorful, iridescent feathers and gold sheet, captures the moment when a wounded and bleeding Christ rises above the altar astonishing the unbelievers in the church.

The work of art is currently at the Metropolitan Museum of Art in New York, where it is on loan from the Musée des Jacobins in Auch, France.

An inscription on the mosaic indicates that it was commissioned by Dominican Friar Pedro de Gant and the governor of Mexico City Don Diego Huanitzin to be given to Pope Paul III, whose 1537 Bull Sublimis Deus forbade enslaving native people.

In the papal Bull, Pope Paul III condemned those who would mistreat the Indians:

The enemy of the human race, who opposes all good deeds in order to bring men to destruction, beholding and envying this, invented a means never before heard of, by which he might hinder the preaching of God’s word of Salvation to the people: he inspired his satellites who, to please him, have not hesitated to publish abroad that the Indians of the West and the South, and other people of whom We have recent knowledge should be treated as dumb brutes created for our service, pretending that they are incapable of receiving the Catholic Faith.

Sublimis Deus not only forbade the enslavement of native people — it guaranteed their “liberty and possession of their property”:

We, who, though unworthy, exercise on earth the power of our Lord and seek with all our might to bring those sheep of His flock who are outside into the fold committed to our charge, consider, however, that the Indians are truly men and that they are not only capable of understanding the Catholic Faith but, according to our information, they desire exceedingly to receive it. Desiring to provide ample remedy for these evils, We define and declare by these Our letters, or by any translation thereof signed by any notary public and sealed with the seal of any ecclesiastical dignitary, to which the same credit shall be given as to the originals, that, notwithstanding whatever may have been or may be said to the contrary, the said Indians and all other people who may later be discovered by Christians, are by no means to be deprived of their liberty or the possession of their property, even though they be outside the faith of Jesus Christ; and that they may and should, freely and legitimately, enjoy their liberty and the possession of their property; nor should they be in any way enslaved; should the contrary happen, it shall be null and have no effect.